Prime Minister Narendra Modi’s July 3 visit to a forward post at Nimu near Leh was not just a visit to the border area but it was loaded with messages to different stakeholders, namely, India, China, and the global community. 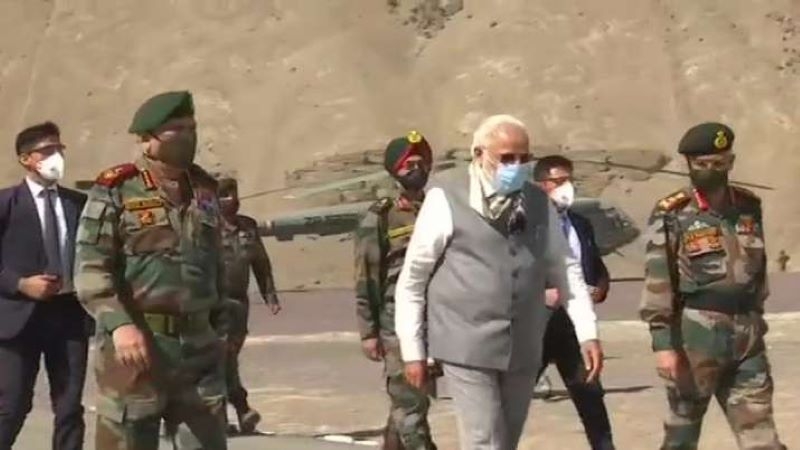 The very presence of the Prime Minister against the background of the June 15 bloody stand-off with the Chinese forces in Galwan Valley, was definitely a fantastic yet unexpected morale booster for the Indian troops. The visit assured the nation that the present leadership is resolutely committed to protecting and securing the safety of our borders at all costs.

At the same time to the world, it disseminated the message without mincing words that the New India under PM Modi’s leadership will not tolerate any infringement on its sovereignty.

And the message to China was loud and clear: The era of expansionism was over and new era of development is on. No nonsense would be tolerated.

Prime Minister Modi visited the injured soldiers at the Hospital at Nimu, addressed the troops involved in the stand-off with China, and was briefed by the senior officers about the exact position on the border, our preparedness, and the military talks with China’s PLA.

Modi explicitly warned China about pursuing its expansionist plans when he said that the era of colonial expansionism was over. In the past, these expansionist forces have done great harm to humanity clearly indicating what China did to Tibetan people when it forcibly occupied the Himalayan Buffer state while India under Nehru remained a mute spectator.

The message Modi delivered to China without mentioning its name is clear: Desist from all activities of territorial aggression across its boundaries with countries from Central Asia to the South China Sea, including, of course, India. The message did hit its target and the prompt response from the Chinese Embassy in New Delhi issued a denial that it had made any such expansionist moves.

The Prime Minister’s address also had a message for the global community that was watching the increasing seriousness of the happenings along the India-China border. Modi mentioned the Indian tradition of peace and bravery indicating that diplomatic alternatives would be tried before taking any final and hard decision

To the countrymen, his address signified the determination of the government to face the challenges at the LAC and to continue with the infrastructure and economic developments.

His address to the soldiers carried a very encouraging message when he quoted a Sanskrit verse “Veerbhogya Vasundhara” meaning only the brave can safeguard and secure the land. He bowed to the valor of the brave men and assured them that the entire 130 crore Indians are standing behind them in solid support.

The Prime Minister’s decision to visit the forward base areas along the border and his speech must be welcomed. While his visit endorsed the resolve of the government and the importance it attached to the military issues, it nevertheless triggered the comparison in the approach of the leadership that failed in 1962 and the present leadership. And such a comparison was inevitable. For, India had a leadership then that did not give much importance to the border security. Not only that, Prime Minister Jawaharlal Nehru even favored the scrapping of the Armed forces! India paid a very heavy price of such utopian peace initiatives then.

Today’s India under Prime Minister Narendra Modi is different from India under Nehru in 1962. The world has understood it and extended its support to Modi’s moves. The moves by the USA, European Nations, Australia, etc. speak for this paradigm shift under Modi’s leadership.

The Prime Minister’s visit thus has multiple messages. The effects of these messages would be visible in the days to come as it has deep implications for the future.