Massive fire broke out at a residential society at Nehru Nagar, Kurla in the morning of October 13

Total Views |
zzMumbai, October 13: A massive fire broke out at a residential society at Nehru Nagar in Kurla, Mumbai, earlier on Wednesday, morning of October 13. In this unfortunate incident, close to 20 motorcycles which were parked here, were gutted. 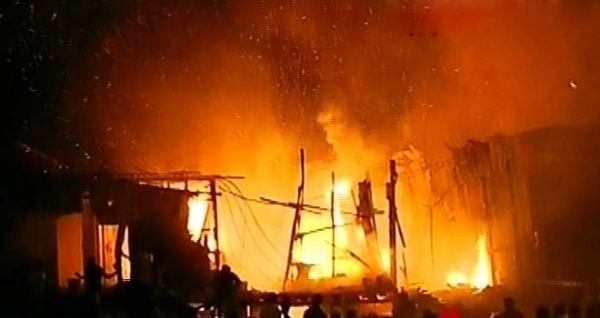 The fire department's personnel have now managed to douse the fire. Police officials too, were present at the spot. More details are awaited at present.
Earlier this month, another massive fire broke out in a scrapyard in Mankhurd area of Mumbai. Fire-fighting engines on the spot were able to douse the flames. As soon as this incident was reported, the fire department rushed as many as 6 fire tenders to this spot. As of now, no casualty has been reported in the incident.
In the recent times, many such incidences of massive fires are being reported in Maharashtra like the fire which broke out in a chemical factory located at the Boisar Tarapur industrial area of Palghar.
Also Read | 18 dead in fire at Pune chemical plant; district collector orders inquiry
Fire Mumbai Kurla Fire department Mankhurd