Bloodshed in Beirut over August Blast investigation issue: Snipers onboard

Total Views |
Beirut, Oct14: Gunfire erupts near Hezbollah-led protest calling for the removal of the judge from Beirut blast investigation. When gunfire erupted as Hezbollah supporters gathered to oppose the judge probing the Beirut port bombing, at least six people were murdered and scores more were injured. 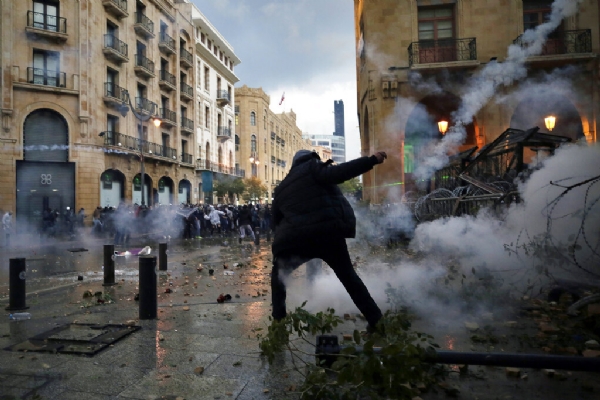 Hundreds of Hezbollah members dressed in black gathered outside the Beirut Justice Palace on Thursday to demand that Judge Tarek Bitar be removed from the Beirut Port explosion investigation, accusing him of prejudice. Bursts of gunfire could be heard from the adjoining Tayyoune neighbourhood, scattering the enraged demonstrators.
According to the Lebanese Red Cross, at least six persons were murdered and 25 others were injured by gunfire.
The Lebanese army stepped in and apprehended one of the shooters. The gunmen' identity and affiliations were not immediately evident.

Also Read: North Korea unleashes its "Super Soldiers" in a new video: See it here
Prime Minister Najib Mikati has appealed for calm and warned against inciting violence in Lebanon. The army asked residents to flee the area of the event and warned that anyone who opened fire would be shot.

Hezbollah and its affiliate Amal issued a statement urging its supporters to remain calm and "not be dragged to harmful dissension."Residents in nearby neighbourhoods told that gunfire was continuing as Civil Defense volunteers worked to evacuate families trapped between the crossfire.
Also Read: 'Vasudhaiva Kutumbakam' is India's belief; the world must unite against terrorism says S Jaishankar
The unrest occurred amid rising tensions over the investigation into the deadly explosion at Beirut's port on August 4, 2020. Protesters gathered in Lebanon's capital two days after Hezbollah Secretary-General Hassan Nasrallah issued his harshest condemnation of Bitar to date. In his probe, Nasrallah accused the court of "politically targeting" authorities.
Beirut Blast Judge Violence Hizbullah insurgents radicals Violence Bloodshed Snipers Killings