The DPCC cited rising pollution in rivers and lakes as the reason for banning idol immersion. 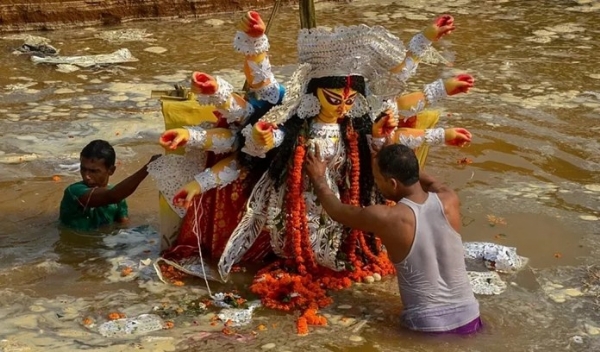 
“Consequent pollution of such water bodies has been a matter of concern. In addition to silting, toxic chemicals used in making idols tend to leach out and pose serious problems of water pollution. Studies carried out to assess deterioration in water quality due to idol immersion revealed the deterioration of water quality in respect to conductivity, biochemical oxygen demand, and heavy metal concentration,” an order issued by the DPCC said.
Those who violate the order by immersing idols in water bodies will be fined Rs 50,000 per default.“It may be noted that the violation of directions issued under Section 33 A of the Water (Prevention and Control of Pollution) Act, 1974, or the rules made thereunder shall be punishable under section 41 of the said Act which includes imprisonment up to six years and with fine," it said.
The order also issues directions on how the idols should be made, when the idols were already made weeks ago and are scheduled for immersion tomorrow on the occasion of Vijaya Dashami. It says that idols should be made only from natural materials like traditional clay, and used of Backed clay, Plaster of Paris, etc are prohibited.
It should be noted that Durga Puja Idol Immersion in River Yamuna was banned in Delhi in 2019 and 2020 also, but the river remains one of the most polluted rivers in the country.
.
.
idol immersion Yamuna river Durga Puja DPCC Delhi. AAP government Kejriwal Arvind Kejariwal