According to the government"s CoWin website, over 70 crore people have been administered the first dose of the covid vaccine while 29 crores have received the full doses.

New Delhi, October 21: Achieving the important milestone in the world’s largest inoculation drive, India scaled the peak of one billion Covid-19 vaccine doses on Thursday, nine months after it launched “the world’s biggest vaccination drive”. A total of 100 crore vaccine doses have been administered so far to eligible beneficiaries. 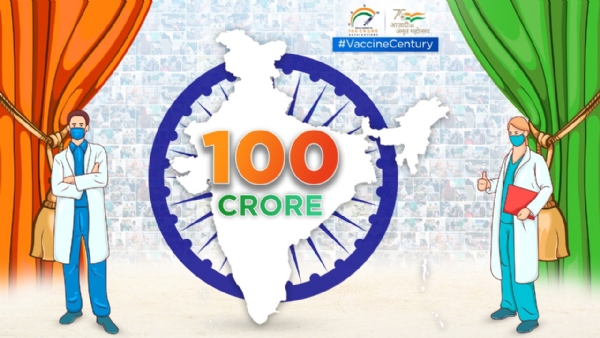 According to the government's CoWin website, over 70 crore people have been administered the first dose of the covid vaccine while 29 crores have received the full doses. The top five states which have administered the highest number of doses are Uttar Pradesh followed by Maharashtra, West Bengal, Gujarat, and Madhya Pradesh.
Also Read |
Nation beams with pride! India administers 75 cr COVID vaccines
Congratulating the citizens of the country for achieving the feat, Prime Minister Narendra Modi on Thursday said that the country is witnessing the triumph of Indian science, enterprise, and collective spirit of 130 crore Indians. He also thanked the healthcare workers for the achievement.
"Congratulations India! This is the result of the leadership of our visionary Prime Minister Narendra Modi," Health Minister Mansukh Mandaviya tweeted.

Dr. VK Paul, the NITI Aayog Member for Health, congratulated the people and health care workers of India on this milestone. "It's remarkable to reach the 1 billion dose mark for any nation, an achievement in just over 9 months since the vaccination program started in India," he said. He however pointed out that 25% of adults, who are eligible to receive free vaccination are still unvaccinated. “Efforts must go forward to vaccinate those who haven't taken the first dose," he added.


Nearly 90% of the vaccinated population has received shots of the AstraZeneca vaccine, known locally as Covishield, produced by the Pune-based Serum Institute of India. Apart from Covishield, Bharat Biotech’s Covaxin, Russia’s Sputnik V, Moderna, and Johnson & Johnson vaccines have received emergency use approval in India.

Also Read |
Marching rapidly, India administers 97 crore Covid-19 vaccines
The countrywide vaccination drive was rolled out on January 16 with the most vulnerable groups being given priority - healthcare and frontline workers were inoculated in the initial phases. The next phase of vaccination commenced from March 1 for people over 60 years of age and those aged 45 and above with specified comorbidities. The country launched vaccination for all people aged more than 45 years from April 1. The government then decided to expand its vaccination drive by allowing everyone above 18 to be vaccinated from May 1.
.
.
India vaccines COVID-19 Coronavirus