Konoklata Mahila Bank, or Konoklata Women Urban Co-operative Bank, has managed to change the lives of 100s of women in Jorhat, Assam and its neighboring districts. That is all thanks to Lakhimi Baruah for initiating a bank exclusively for women. She is one of the 8 personalities from Assam who have conferred the Padma Shri award this year. 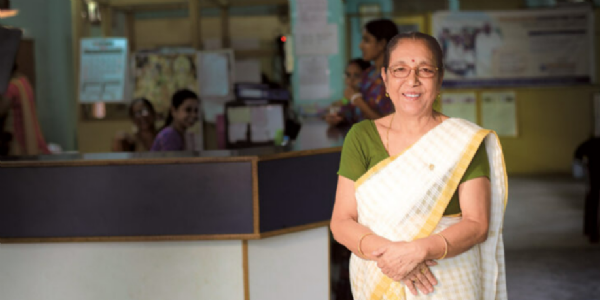 Even as a teenager, Lakhimi Baruah was able to observe the sufferings of the womenfolk, and that set her apart from others her age. In 1983, she established Mahila Samiti, or women’s committee, in Jorhat. She began working with a large number of economically, educationally backward women and realized their financial insecurity. Even if the women were engaged in small income-generating works, they did not have any saving mechanism. That is when the idea of opening a bank catering to the needs of these women came to her.
She also aided in forming self-help groups and approached banks for financial help but that didn’t work out well. Even during her association with the Central Co-operative Bank, she realized that the women customers couldn’t submit documents properly. Now, she was more determined than ever to start something exclusively for women and run by women. Hence, the Konoklata Mahila Co-operative Bank was started by 52 promoter members in 1990 with the raw efforts of Lakhimi Baruah.
The main objective of the bank was to provide commercial banking facilities, including safe empowerment, by providing opportunities for self-employment. The bank was registered by Reserve Bank of India on May 22, 1998, as a financial institution. The general assembly of the bank appointed her as its managing director. She is still working on this post. Eventually, the bank expanded its activities by opening new branches. The bank has become one of the most trustworthy financial institutions for women, getting loans at a low-interest rates.
Till now, 300 women self-help groups availed loans provided by the bank. But the road to start the bank to serve the women and to be run by women only, was not an easy one. She recalls that in the 1990s, in Assam, this improbable if not impossible. She was determined though. She personally wrote 2 letters to RBI’s Mumbai and Guwahati offices respectively seeking help in setting up the women-only bank. She did receive replies of the letters, which asked her to proceed with the new urban co-operative bank policy. She was excited to get the reply letters that motivated her.
That was just the beginning, as they struggled for 8 long years to get it recognized in 1998. Time and again their proposals were rejected every 6 months. The criteria they needed; couldn’t be met. Many a time they broke down. Not a lot of confidence was shown in them. Their next hurdle was to get license for financial dealings. They needed to have at least 1,000 members and with Rs 8 lakh. Finally, in 1999, they gathered Rs 8.45 lakh capital and the number of total members went up to 1,420. The next year, RBI issued them the license for financial transactions.
She gives credit to her late husband, Prabhat Baruah, for being a pillar of strength behind his efforts. She says that even the name was suggested by him, which they all liked a lot. He told us that Konoklata sacrificed for the liberty of India, and we should fight for the financial liberty of the women in the society.

According to her, around 70% of women are illiterate and more than 80% are from a downtrodden section of society, who have taken loans or benefitted from the bank. The bank was named after Konoklata Barua - a freedom fighter from Assam martyred at just 17. She is widely respected for her bravery.

Real women empowerment comes when a woman tries to strengthen another woman. And, Baruah has been an absolute perfect example of this. For this success story, she definitely deserves Padma Shri Award.
Lakhimi Baruah Assam Konoklata Mahila Co-operative Bank Guwahati