Two Bengali non feature films, being screened at the IFFI, came with a breath of fresh air, quite a bolt from the blue for the left inclined cinegoers because these two films, for a change showcased themes which are poles apart from the leftist narrative.


West Bengal, famous for its creative excellence, has always been the cultural capital of our country. Hence, it is but natural that films made in Bengal – the land of the phenomenal Satyajit Ray, would be the mainstay of a Film Festival held in India, where the special focus by our Central Govt is on regional language films.


In the 52nd International Film Festival of India (IFFI), being held in Goa from the 20th November, 2021; Four Bengali films in the Feature film category – Ábhijan (The Mission)’ by Parambrata Chattopadhyay, ‘Kalkokkhyo (The Dark Room)’ by Sarmistha Maity and Rajdeep Pal, ‘Nitantoi Sahoj Saral (Quite Simple)’ by Shatrabit Pal and ‘Manik Babur Megh (Manik Babu’s cloud)’ by Abhinandan Bandopadhyay, will be screened in the festival.
And in the Non-Feature category, two Bengali films – ‘From Saibari to Sandeshkhali’ by Sanghamitra Chaudhuri and "Naad-The Sound" by  Abhijit Ashok Pal are slated to be screened in the Indian Panorama Section.

The cynosure of all attraction and inquisitiveness are the Non- Feature category of Bengali films. The reason is anybody’s guess. Bengal has been the hub of leftist liberalism for a long and the typical leftist ideology has been the dominant feature of Bengal’s art and literature for more than five decades. The leftists have, successfully been using the entertainment media as a political weapon to ingrain the masses, particularly the youth into their ideology. Hence, all cinemagoers were habituated to expecting doses of leftism from small to big measures while viewing a film made in Bengal.

Keeping in mind such a scenario, the two Bengali nonfeature films, being screened at the IFFI, came with a breath of fresh air, quite a bolt from the blue for the left inclined cinegoers because these two films, for a change showcased themes which are poles apart from the leftist narrative.

Sanghamitra Chaudhury’s ‘From Saibari to Sandeshkhali’ showcases the macabre nature of communist rule that Bengal has been subjected to , stressing on the darkest phases of Bengal’s contemporary history, where democracy took a backseat and crimes against humanity in the form of mass killings and gang rape became a norm.

And Abhijit Ashok Pal’s ‘(Naad) the sound traces the tribulations of a history teacher belonging to the Matua community – a Dalit community from East Bengal, followers of Babasaheb Ambedkar, who were compelled to flee from their land due to persecution and torture by the radical Islamists there, taking shelter in the bordering villages and towns of West Bengal.

The teacher, to his utter surprise, found his little daughter chanting the Azan that she would hear from a nearby mosque at the break of dawn. Though he and his family were quite tolerant and accommodating, the teacher wished that his daughter should be aware of the beauty of her own culture and faith, rather than be drawn exclusively towards another faith. The film highlights the way the father gets his daughter to learn classical music early every morning so that she is drawn more towards the same, which again is a significant ingredient of her culture and away from the sound that she was accustomed to hearing every morning , so much so that the same was occupying her young mind and psyche. 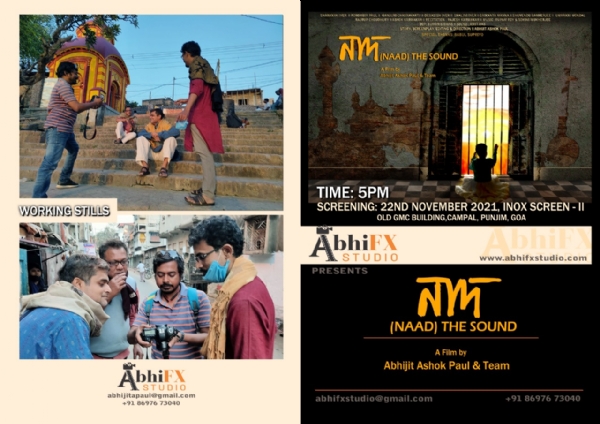 Thus the film "Naad" focuses on how a parent finds ways and means to imbibe and respect her own culture, faith and heritage, making it a way of her life, while not disrespecting any other faith or culture. The beautiful message conveyed through this film is meant to be emulated by all modern day parents.

No prizes for guessing how difficult it was for these two film-makers to make films on themes which are ideologically polls apart from that of the ruling dispensation of Bengal, given the politically volatile scenario, where, those who do not ideologically agree with the ruler are sure to face their ire and given the fact that the ruling dispensation does have a firm grip on the local film industry.

The surprise package of the IFFI this year is the last minute exclusion of the film, ‘Dictionary’ by the West Bengal Education Minister and Film maker/dramatist, Bratya Basu. While Bratya Basu expressed his discontent with this decision by the IFFI, claiming the same to be politically motivated against him because he belonged to the ruling TMC in Bengal, the IFFI authorities clarify that they were compelled to drop his film from their list of films to be screened in the Indian Panorama section due to a spelling error made by him in the application format.

This, coupled with two non feature films with themes which are polar opposites of the typical leftist genre, focusing on soft Hindutva and leftist torture have caused the left inclined film fraternity to cry foul with the allegation that the ruling BJP at the Centre and the RSS were trying to push in Hindutva in the minds of the people through such films.

Since the leftist artists and film-makers in our country have been doing so through their films all these years, it is natural for them to feel so, when they find that their territorial dominance being challenged by extremely well made and intriguing films of an entirely different genre from theirs.

What began with Vivek Agnihotri’s ‘Buddha in a traffic jam’ and ‘The Tashkent files’ a few years ago has motivated many nationalistic film-makers to make a foray into film making, moving away from the typical hinduphobic left-inclined genre. Films like will ‘From Saibari to Sandeshkhali’ and ‘Naad-The sound’ will encourage more non leftist film-makers to make more films which are not hinduphobic or showcase the left ideology, paving the way for a wider variety and good quality films.
West Bengal Leftists Bengali non-feature films IFFI 2021 IFFI