This temple was built between 1599-1608 AD by the queen Kanakwati, wife to king Man Singh 1st in the memory of son Jagat Singh

India has a plethora of temples having immense architectural importance, owing to the intricate way in which they have been designed and built. Each region also has its own history and culture, which clearly reflect in places like temples. Jagat Shiromani Temple is one such temple. This temple, 400 years old, is located in Amber, Jaipur, Rajasthan. The ornate temple is dedicated to Meera bai and Lord Krishna. The temple has a lot of importance in the history of the town of Amber. 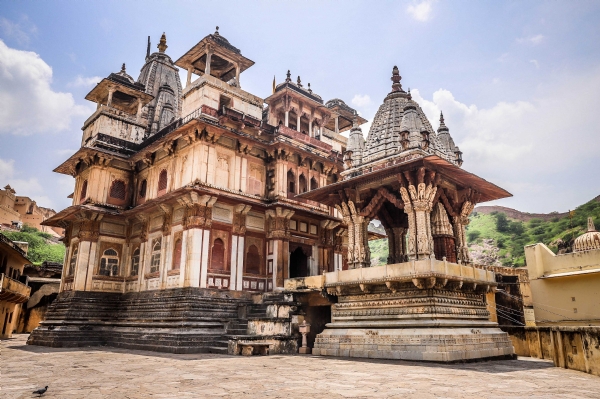 About the temple – Right by the entrance of the temple, is a canopy in the pedestal section, wherein there is an idol of Garuda - the vehicle of Lord Vishnu. This canopy is said to be the Garuda Mandapa. Several intricate carvings can be seen on the exterior of the temple. An army of elephants are there in a row, and horses in another at the top. There is a face of a tiger below it. In the second row is an illustration of a procession and people are depicted in a delighted mood. Just above the pedestal, in black stone, are 3 marbles plates. These depict prominent Indian mythological characters.
The interior of this pristine temple is built out of red sandstone, for the most part. It consists of a mandapa hall which leads into an antrala, which precedes the garbha griha or the inner sanctuary. The mandap has a lofty ceiling and is lined by double arched porticoes on either side. These are supported by intricately carved columns. The antrala is separated from the mandap with a carved railing in white marble and red sandstone.
Beyond the antrala is garbha griha, which has the images of several gods honoured at here. Intricately carved white marble frames the doorway which leads into the garbha griha. The walls of upper floor and ceiling contain the painting of garuda-mandapa in front of the temple, and is intricately carved which is carrier of lord Vishnu.
This temple was built between 1599-1608 AD by the queen Kanakwati, wife to king Man Singh 1st in the memory of son Jagat Singh. Meera bai was said to be a devotee of Lord Krishna. Thus, the temple is also known as the Meera bai temple. The temple is an example of northern Indian (Nagar) type of architecture. Enticing murals in the ceiling of its assembly hall are religious, representing the 17th century art of Amber.
Also Read | Yulla Kanda - Home to the highest Shri Krishna temple in the world!
Legend behind the temple – An interesting legend tags along with this ancient temple: It is said that the statue of Lord Krishna in this temple is same one that Meera Bai used to worship in the state of Mewar roughly 600 years ago. This statue was saved from destruction by rulers of Amer in the Mughal war with Mewar. It was brought safely to Amer. And statue was set in a temple. The statue of Meera bai herself was set in the temple along with that of Lord Krishna. Hence, this temple is an extremely prominent part of the heritage, architecture and religious in this town.
Jagat Shiromani Temple Meera bai temple Lord Krishna Amber Japiur