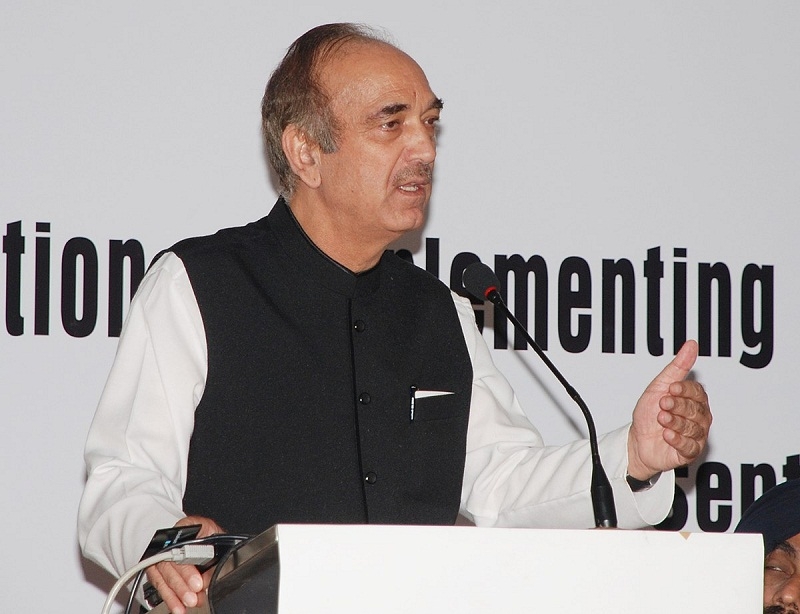 "I am a proud Hindustani Muslim. Muslims should be proud of this country but the majority community should take steps forward towards the minority." Ghulam Nabi Azad on his last day in Rajya Sabha.

“There is a sense of unease among Indian Muslims and that nationalism is a growing problem in India”. Mohd Hamid Ansari on his last day as Vice-President of India.

These two quotes by top Muslim politicians of our country reflect on the two mindsets of Indian Muslims at present.

Ghulam nabi Azad is a seasoned politician, a diehard Congressman and a statesman par excellence. But above all he has a humane face and approach to various problems. He served as a chief minister of Jammu and Kashmir, minister in union cabinet handling various portfolios and remained a member of the Lok Sabh and the Rajya Sabha spanning his political career of decades. After serving the Rajya Sabha for 28 long years, he is now retiring on February 15. He was leader of opposition in the Rajya Sabha since 8 June 2014.

Azad observed that the situation in other Muslim countries was not very peaceful and the very existence of Muslims was threatened by the ongoing conflicts, war and terrorism. Mentioning Pakistan, Azad proudly said that the he was fortunate to not to have gone to Pakistan.

As he rose to speak on his last day in Rajya Sabha, Ghulam Nabi Azad noted, "I never visited Pakistan but I know the problems and circumstances in that country and I hope those problems do not come to haunt the Muslims of India and after seeing the fate of Muslims in many countries I feel proud of being a Hindustani Muslim."

“I learned a lot from Atal ji...how to break the deadlock and how to run the House,” Ghulam Nabi Azad said in Rajya Sabha.

Ghulam Nabi Azad also thanked Prime Minister Narendra Modi in his retirement speech in Rajya Sabha. Azad said the PM never took his words against him in the Upper House personally and separated the personal from politics.

“There were times when we had verbal fights. But you (PM Modi) never took my words personally,” Ghulam Nabi Azad said. The Congress veteran went on to note that the country is run with collaborations and not fights.

Reciprocating to Ghulam Nabi Azad’s magnanimity and sagacity, Prime Minister Narendra Modi too praised him for being a true and democratic-spirited parliamentarian. Recalling the 2007 terrorist attack on tourists from Gujarat who had gone to Kashmir, Modi mentioned how Azad personally telephoned him and took all possible steps to ensure safe passage to these hapless victims.

PM Modi said Ghulam Nabi Azad cried on the call while informing him about the horrific attack. "Azad was the first person to call me. During that call he could not stop crying," PM Modi said with a choked voice as tears rolled down from his eyes.

Struggling to overcome emotions, Modi said, “Posts come, high office comes, power comes and how to handle these, one must learn from Ghulam Nabi Azad. I would consider him a true friend.” “I won’t let you [Ghulam Nabi Azad] retire, will continue taking your advice. My doors are always open for you,” the PM said.

PM Modi said it will be difficult for anyone to fill the shoes of Azad as he cared not only about his political affiliation but also about the country and the House. "I worry that after Azad whosoever will take over from him will have to fill very big boots because he cared not only about his party but about the country as well as the House. This is not a small thing, this big thing," PM Modi said.

Rajya Sabha Chairman M Venkaiah Naidu described Azad as a voice of sanity in public life over few decades when he made valuable contributions while serving both in government and in opposition. Venkaiah Naidu said Azad's retirement is particularly painful with the House having lost Sushma Swaraj and Arun Jaitley.

Compare against this background the statement by Mohd Hamid Ansari, former Vice-President of India. Ansari, also a diehard Congressman, served as Vice-President for two consecutive terms. And the moment he stepped down from the high office, he observed, “There is a sense of unease among Indian Muslims and that nationalism is a growing problem in India”. 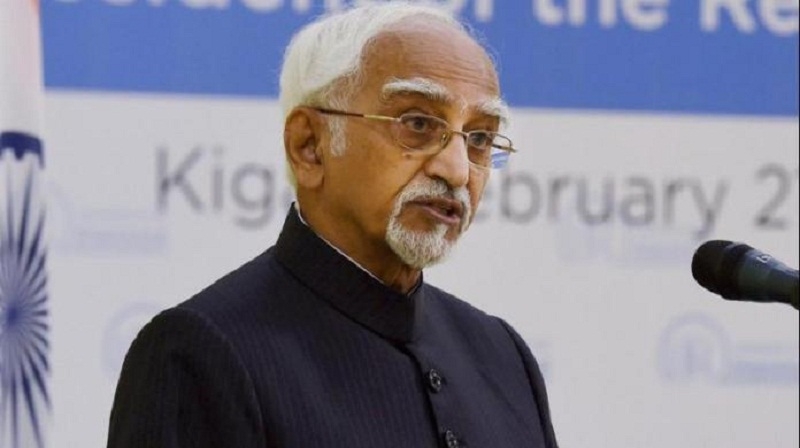 Ansari also triggered a controversy by visiting a program as a guest which was organized by Popular Front of India (PFI), a fundamentalist Muslim organization in Kerala. He has since said that he went there as a state guest and no one warned him about the presence of PFI.

Ansari came under severe criticism for inaugurating an international conference organized by a New Delhi based academic research organization with the support of the women’s wing of the PFI in Kozhikode, Kerala, recently.

The Popular Front of India is a controversial organization with considerable presence in Kerala, Karnataka and Tamil Nadu. According to media reports, this month, the National Investigation Agency, in a report to the Home Ministry, said PFI was involved in terrorist acts, including running terror camps and making bombs, and should be banned. The agency cited, among others, a case in which the group’s members are accused of chopping off the hand of a professor in Kerala’s Idukki district in 2010 allegedly for insulting the Prophet in a question paper.

Mohd. Hamid Ansari, an IFS of 1961 batch has a checkered career as a diplomat, spanning over 38 years. He served as Indian ambassador to Australia, Afghanistan, Iran, and Saudi Arabia. He also served as the Permanent Representative of India to the United Nations between 1993 and 1995. He was appointed the Vice-Chancellor of the Aligarh Muslim University from 2000 to 2002. Later, he was appointed as Chairman of the National Commission for Minorities from 2006 to 2007.

After enjoying all these posts, authorities reposed in him not as a Muslim but as an Indian, Ansari showed his true colors when he stepped down as Vice-President of India by raising the issue of insecurity and the unrest arising of that among the Muslims of the country. He detested the BJP and its policies to the core of his heart and had raised the issue of post-Godhra violence in Gujarat, raised questions over the Balakot air strike against the terror launch pads in Pakistan, and loudly lamented over what he called ‘absence of secularism’.

Ghulam Nabi Azad and Mohd. Hamid Ansari - both Congressmen to the core of their hearts, have expressed two divergent views on being Muslim and that too an Indian Muslim. While Azad took a conciliatory approach to strike the right chord among the Muslims who preferred to stay in India even after partition, Ansari tried to ignite the fears of the Muslims vis-à-vis Hinduphobia.

Azad seems to be intelligent to see the new change in the Muslim psyche and quickly presented the inclusive and positive approach. He is aware of the condition of those ‘Muhajirs’ whose forefathers migrated to Pakistan with a ‘Great Hope’ but after four generations still carrying the tag of ‘Stateless people’. As compared to their plight, the Muslims in India are far better in all respects. Thus, when Azad said he is a proud Hindustani Muslim and that all Muslims in India must feel the same pride, he is only reminding them how fortunate they are as compared to their Pakistani compatriots.

There is this new writing on the wall which leaders like Ansari failed to read and understand and prefer to live in the world they created out of their perceptions. Ansari represents the obscurantist, fundamentalist and communalist ideology nursed by the Congress under the guise of minority-ism and the vote bank politics all through these years. They failed to see how Muslims are coming forward to contribute for the “Imam-e-Hind” Sri Ram’s grand temple at Ayodhya; they failed to see how the Muslim community welcomed the decision of triple talaq which gave justice to over 8.5 crore Muslim women emancipating them from the age-old inhuman social custom; they failed to understand the long-term positive implications of abrogation of Article 370 and 35A from Jammu and Kashmir and so on.

The leaders like Ansari only wanted to enjoy the fruits of being minority but hardly cared for the welfare of their own community. They ruled this country for six decades but hardly bothered to see what their vote bank politics has done to the Muslims in India. Ansari referred to Sachhar Committee report in his interview to Zee News. For a layman like me, Sachhar Committee reports speaks volumes on how the Congress that claimed to be the ‘messiah’ of the Muslims treated them with lease respect, equality and honor. They were considered only as their vote banks and even today, the party and its leaders refuse to take a different recourse.

It is against this background, Ghulam Nabi Azad’s observations and appeal to the Indian Muslims needs a special mention. When he said that he is a proud Hindustani Muslim and each Muslim should feel the same pride in his heart, Azad was referring to the age-old tradition of ‘One Country One People’ underlining the fact that all those living in this country are one by their ancestors, culture and motherland. By making this statement he rose to the stature of Justice M C Chhagla who unequivocally declared that he was ‘Hindu by race and culture and Muslim by religion’ in his autobiography “Roses in December”.

What India needs today is such inclusive and collaborative approach and not the divisive policy propagated by people like Hamid Ansari. We need more of Ghulan Nabi Azad so that the Muslims and Hindus can join hands in making India “Atmanirbhar” world leader in future. The ball is in the court of the Indian Muslims. They have to decided which way to go?