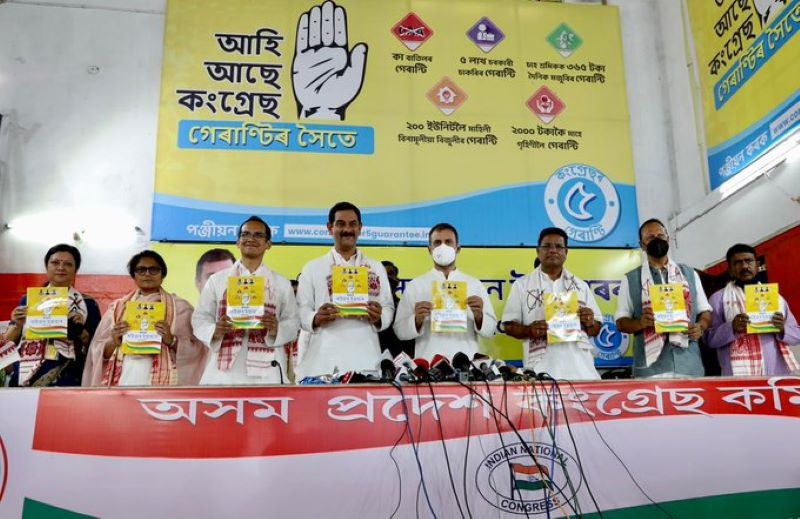 As the electioneering for the first phase of the three-phase assembly election comes to an end tomorrow evening, the Congress and the BJP released their respective manifestos and made promises to the voters.

Releasing the Congress manifesto Rahul Gandhi described it as ‘People’s Manifesto’ though the document sported the Congress symbol. He said that it contained the aspirations of the people of Assam and the Congress has promised to fulfil them.

The Congress manifesto promised among other things fie lakh jobs and non-implementation of the Citizenship Amendment Act (CAA) in the state, if voted to power, the possibility of which is very remote.

Raising the fear of BJP and RSS attack on the diverse culture of India and Assam, Rahul Gandhi promised that the Congress will defend that culture. The Congress guarantees to defend the ‘Idea of Assam’ that contains its culture, language, tradition, history and the way of thinking, Gandhi said.

Along with five lakh jobs, loan waiver to farmers, lunch at Rs 10 and many other things, the Congress has promised to set up Gaushalas in each district of the state.

Key points of Congress' manifesto for the Assam Assembly polls 2021:

- 200 units of free electricity for each household.

The BJP with its allies, ruled the state in five years and now poised to repeat the performance with better majority. The party is contesting 92 seats leaving the remaining to its allies – the Asom Gana Parishad and the Bodoland party. 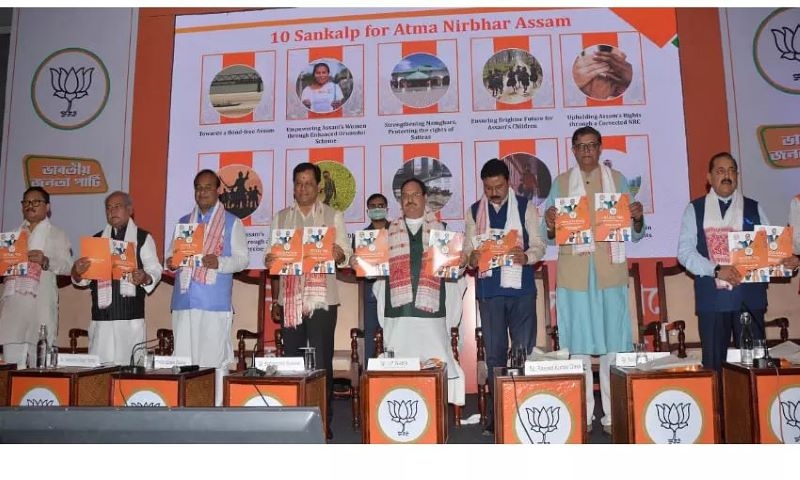 The overall performance of the BJP government in Assam was satisfactory and promising development of the state. The Sonowal government implemented various development projects in the state in consultation with the Central Government under Prime Minister Narendra Modi.

Christened as ‘Sankalpa Patra’ the BJP manifesto includes key promises whose successful implementation is critical to addressing some of the burning problems of the state. But the most important among these promises is the promise to launch the ‘Mission Brahmaputra’.

Assam is plagued with annual devastating floods that cause damage to property and life with the surging waters of the Brahmputra – one of the two masculine rivers, the other being the Sindhu. The Mission Brahmaputra promises to eliminate all losses and damages due to this annual floods.

The Brahmaputra is the lifeline of Assam. It covers the 500 plus km stretch from Sadiya to Dhubri and is fed by various tributaries on its way to the Bay of Bengal. Controlling this river requires good amount of research, expert support and funds to complete it and ameliorate the sufferings of the people.

It needs a comprehensive approach for the management of the river. All efforts so far were only the piecemeal approach or cosmetic patchwork but the permanent solution always evaded the planners. Every year, floods and erosion caused huge damages to the life, property, livestock, roads, bridges, offices and farmlands worth thousands of crores of rupees pushing the state and its population towards poverty and backwardness.

It is true that the better management of floods caused by the river can reduce the losses and also improve the economy of the people and the state. Long term solution to this problem is necessary to put Assam on the path of development as promised by the BJP. The BJP will have to save this ‘Mission Brahmputra’ from getting eclipsed by the political overtones and priorities.

Against the five lakh jobs promise of the Congress, the BJP promised to make Assam “India’s Entrepreneurial Hub” and create 10 lakh youth entrepreneurs through the “Swami Vivekananda Assam Youth Employment Yojana (SVAYEY). It has promised to support 2 lakh youth each year through this scheme for the next five years.

Another important promise the BJP has made is to increase the monthly assistance under the ‘Orunodoi’ scheme to Rs 3000/- from the existing amount of Rs 830/- and to expand its scope to 30 lakh families. This is most likely to create new hopes and aspirations among the women voters.

The BJP government had eliminated the ‘middleman’ culture by successfully implementing the DBT scheme which ensured the benefit of such schemes directly to the beneficiary. This has made ‘Orunodoi’ a popular scheme, more particularly among women but there were also allegations of deprivation of a section of eligible beneficiaries.

Given the voters’ mood and performance of the BJP government for the last five years, the BJP and its allies are most likely to repeat their performance in the state to ensure faster development of Assam and thereby good days ahead for the people of the state.