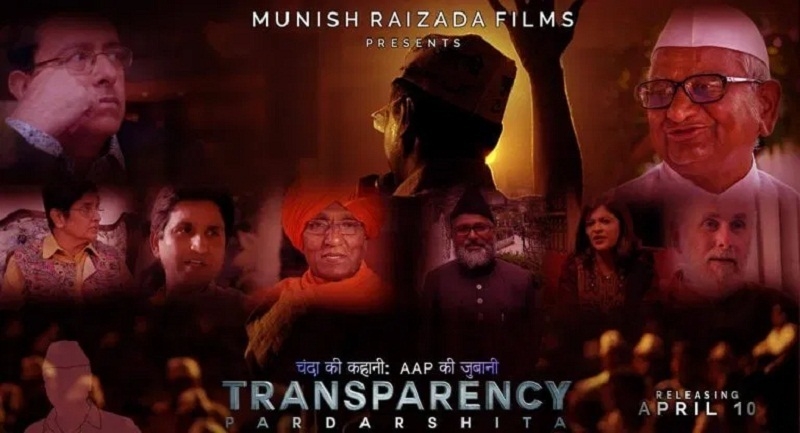 A doctor from Chicago made a film on Arvind Kejriwal.

While COVID patients were gasping for oxygen in Delhi, the advertisement featuring CM Arvind Kejriwal on various TV Channels was too disgusting. What a big irony, the man who arrived on the political stage as a messiah for the underprivileged and a leader to eradicate corruption could stoop so low now!

It was during India Against Corruption (IAC) movement of Anna Hazare that Arvind Kejriwal first came into the picture. Despite Anna’s opposition to the idea, Kejriwal started his own political party, --- Aam Aadmi Party (A) with the sole objective to weed out the corruption that was eating into the very strength of the country. A large number of intellectuals from across the country got impressed by the principles and joined this party.

The mission of the IAC movement also instantly fascinated an eminent doctor from Chicago - Dr. Munish Raizada. Being highly impressed by the objective of Arvind Kejriwal and his AAP, Dr. Munish had enlisted himself as one of the core members of the party. But his association with the part did not last long. What he noticed at the party deeply disturbed him. He was saddened to witness what Kejriwal and Co. were indulged in. He saw the blatant corruption, communalism, and low-grade politics being practiced with impunity.

However, unlike the other disenchanted party members, Dr. Munish, a man of integrity and principle, did not refuse to disappear into thin air. Instead, he determined to come out with guns blazing. He took a vow to call a spade a spade! Thus, Dr. Munish began to explore the best possible means to expose the real posture and gestures of unscrupulous brigand and its premier. It dawned upon Dr. Munish that no one should hatch a scheme that will hurt the interest of the certain community and the nation as a whole. Dr. Raizada quite realized that Kejriwal is not at all hesitant to undermine the integrity of the country --- this fact deeply hurt him. So finally, Dr. Raizada decided that he should bring out a comprehensive cinematic documentary to put forth the inside truths before the masses. “Transparency – Pardarshita” is that outcome. It invariably reflects the unmatched courage, passion and righteousness of Dr. Munish. 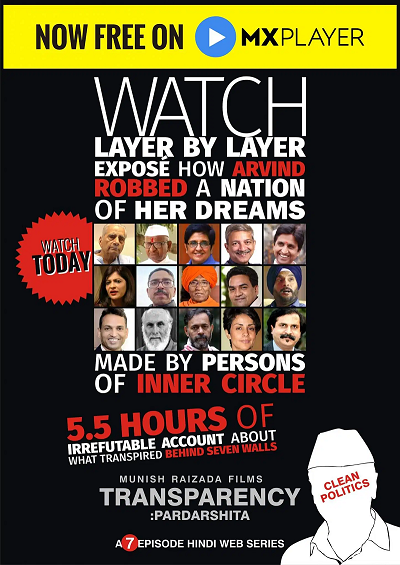 Before getting into the documentary, it is important to know why Dr. Raizada got into politics. The primary reason was his belief that Kejriwal was a “true and upright revolutionary” who had a firm intention to reform the system and take corruption head-on. But the communal tactics of the party and its brazen lack of financial transparency deeply shocked Dr. Munish. He also noticed Arvind Kejriwal openly defied the party constitution.

Now he is already the third-time Chief Minister of New Delhi, even though it goes against the principles and norms of the party constitution. The utter lack of transparency in the party and “one-upmanship” are other factors that did not go down well with the upright Neonatologist from Chicago.

Dr. Munish has shot this documentary all over the world, including in Chicago and London. The documentary takes us to Anna Hazare’s village and of course Delhi. It took more than one and a half years for the determined Dr. Munish to painstakingly piece together the facts which many have been “attempting to bury”.

With extensive research, interviews, and investigation, this exhaustive documentary is a rare testimony. The dedication with which Dr. Munish brought out the documentary is beyond appreciation. Seven-part series with more than five hours of blistering content is indeed an unparalleled contribution to the nation. Here the so-called reformers, social activists, and leaders stand exposed as being the sinister forces with an ulterior motive.

Here lies the million-dollar question. Should we still keep silent? It calls for serious introspection. Are AAP and its members not involved in various anti-national activities? Are they not functioning in the style and manner that go against the ideals and values that patriotic citizens cherish? Who fueled the communal riot of DADRI but kept mum when Ankit Saxena, Rinku Sharma… were murdered by a peaceful community? The current farmer agitation and violence has been insidiously incited by AAP.

Please find out who all have irretrievably bruised the heart of the nation through the CAA movement that led to a horrid bloodbath in early 2020? Who are Tahir Hussain and Pinjra Tod? Are they not the leaders of AAP whose hands are stained with the blood of countless innocent citizens, particularly Hindu? Not just that, it is quite frightening that AAP’s well-wishers have been suspected of having direct nexus with various terror modules in Pakistan.

Please note, this party’s members time and again "roar and thunder" in the language of sedition by standing tall on the pedestal of freedom of expression and secularism. What more? The so-called intellectuals like Arundhati Roy, Shekhar Gupta, Ramachandran Guha, Rajdeep Sardesai, Kanhaiya Kumar, Umar Khalid, Anirban Bhattacharya, Shehla Rashid Shora, Mr. Jignesh Mewani, …, are few who regularly received a pat on their backs from the AAP because they sing the songs of treason which pleases the Delhi CM.

Lastly, with all seriousness and conviction, I say that we need to stand with Dr. Munish Raizada and support him to deal with the wolves in sheep’s clothing. Or else the howls of sinister forces will invite more and more terror elements from porous borders to puncture the sovereignty of the nation.

Dr. Munish Raizada deserves to be commended for the painstaking work he has done. This web series is available for free on MxPlayer. This is a web series I strongly recommend everyone to watch! It is an eye-opener!