Drug menace and inspiration from Assam 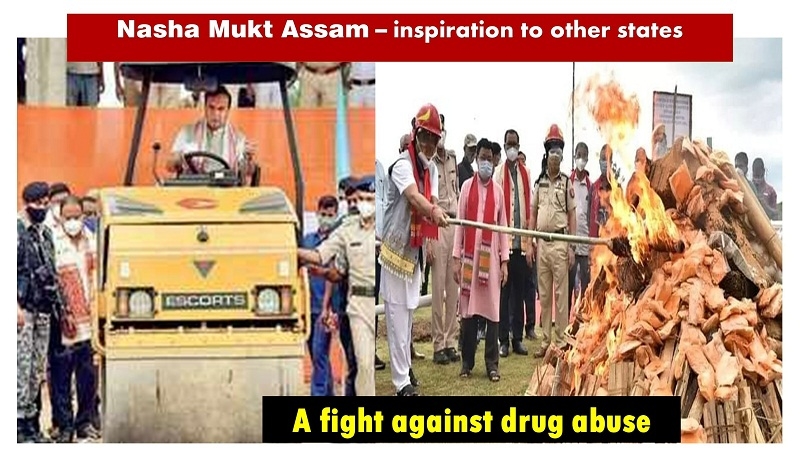 Perhaps many are already aware that the Chief Minister of Assam Himanta Biswa Sarma has won the hearts of millions of aggrieved parents in the country. It is in fact for his bold steps which hardly any other leaders have ever thought of taking.

Soon after he assumed the office of Chief Minister, Sarma aggressively got after the mission of cracking down on drug rackets and drug traffickers. Drugs menace had brought “untold miseries” to countless households across the state. The Assam Chief Minister has effectively proved --- where there is a will there is a way.

He did this all with the same police forces, the same intelligence apparatus and the same bureaucratic fraternity that were in existence for ages. Perhaps he has been able to send out a great message across the country.

What is more interesting is that the Chief Minister himself burnt the confiscated illegal drugs worth amount about Rs 170 crore in Hojai, in the presence of the general public and key members of Karbi Anglong Autonomous Council. That day he wrote with the joy of triumph on his Twitter --- “The Last Rites of Drugs in Assam”!

What followed next was no less remarkable. Last Sunday on 18th July 2021, in Nagaon, the Chief Minister drove a bulldozer over the huge piles of seized narcotics. He reiterated that his government has zero-tolerance against the addictive substances that have weakened the “vitality” of the youth in the state.

So far about 1500 dealers and peddlers have been arrested. This is no mean feat! Of course, these assertive initiatives taken by the Assam CM have literally severed most of the “links and routes” that would have otherwise taken our youngsters into the deep pit of addiction. By all accounts, it takes immense courage, determination and sagacity to take up such issues head-on.

Needless to mention that the rampant drug abuse in most of the states has long been posing a serious threat. Bollywood celebrities have further misled the masses. This writer has met with many parents in distress who have horror of “disclosing” about their children’s addiction to substances and the consequences thereafter.

Drug addiction always leads to mental degeneration. The addicts go to any extent to obtain their drugs. The rise in the cases of petty thefts, burglaries, lootings muggings and various kinds of violent attacks have usually to do with those junkies who have fallen victim to narcotics. They even assault their family members, especially doting mothers.

There are many instances in which the addicts have stolen gas cylinders or any expensive articles from their own houses or neighbors and sold them to others to buy the next quota of drugs. Truly, innumerable families have just “crumbled” when their beloved kids have fallen victim to drug abuse.

Whether one agrees or not, the increasing substance abuse among the youths has in fact drained away the very strength of the states, and the country. One strongly feels that there is no point in counting on the youth power by mere counting their “heads” unless the government adopts effective measures in order to keep each one of the youngsters away from the clutches of narcotics and similar harmful indulgences.

All kinds of drugs are readily available at any corner of almost all states. The peddlers are around to deliver the stuff on a phone call. What all has made this possible and where are we lacking and who all are responsible? It calls for a serious self-introspection. One believes that our concerned leaders and authorities should now seek consultation from our sensibly pragmatic Chief Minister of Assam.

Here one earnestly appeals to each state Government in the country to adopt zero-tolerance policies of “Nasha Mukt Bharat” on drugs as Assam Government. Youths are assets to the state. To save them from the drug menace should take precedence over all other issues. A state will certainly thrive and will become richer and vibrant when the “blood” of the youths and their “minds” will not be poisoned by the narcotic substance. Driving the bulldozer over the drug menace is the only way out!