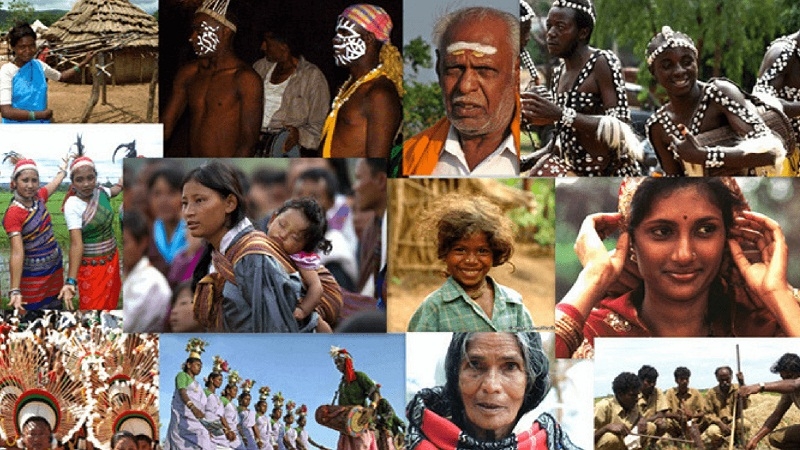 “How can it be a sin if by uttering falsehood I add to Your (God’s) glory? -St. Paul

Every year the world celebrates the Indigenous People's Day. In the Indian context the term 'indigenous' is often referred to suggest the tribal people living in deep forests, or on the hills far away from the madding crowd of the so-called civilized people. But they were made the soft target by the anti-India forces, mainly the Christian Missionaries and church sponsored NGOs by instilling in them the feeling of separateness from the mainstream Indian society. The following discussion tries to expose some myths and realities associated with the Identity of the Indian Tribal people.

The European conquest of the world since the beginning of the 16th century brought face to face the conquistadors and the localized Native, Aborigines or the Ethnic people of those distant lands including India. The anthropometric differences ranged from striking to starkest given the White Man’s self image in the anthropomorphic sense being the norm. Claude Alvarez has depicted the large scale genocide and other forms of painful treatments carried out by the White Man in every land in their quest of power, wealth and conversion to Christianity of the remaining masses.

In India Genocide was not a significant issue. The focus in the last over hundred years of Missionary activity in India was on increasing the herd of Jesus. A number of steps have led to the identity of the tribals as we see today, as against their historical one which is discussed below.

In India the people who dwell in the forests, on the hills or in inaccessible areas the country were labeled as Adivasis, that is, the Indigenous or Original Inhabitants of India, by the colonial rulers mostly Europeans. The British rule lasted for nearly two centuries and as such this concept of ‘tribal’ or ‘adivasi’ or ‘indigenous people’ has taken roots in the present-day Indian social and political milieu.

The very distinction of our society into tribal and non-tribal or adivasis and non-adivasis was historically incorrect. This was one of the two falsehoods the British nurtured that provided legitimacy to the British Invasion. They spread the first falsehood that the tribals were the original inhabitants of this land. The second was that the Aryans were foreign invaders like them, who pushed these Original Inhabitants deep into the Jungles and subjugated them.

Unfortunately, these notions have gone unchallenged by the planners, politicians, social leaders and the academic researchers in the post-independence era. They have come to think of the tribals as people different or alien to Hindus, and believed that their separateness should be preserved at all costs because they provide the most vital link in human evolution process.

The Britishers thence segregated the forest-dwellers from the mainstream population. The areas inhabited by these forest and hill dwellers were declared ‘protected’ and kept out of bounds for all others except the Christian missionaries. The ‘janjatis’ found themselves left to fend for themselves against this sudden onslaught of the foreign missionaries, their religion and vigorous efforts to convert them to their flock. The janjatis speak different tongues, live in varied environments and face different problems resulting in lack of proper communication and unity amongst themselves.

The British Occupation Government of India also undertook to list these hills and forest-dwellers as ‘animist’ in the census, notwithstanding the opposition by many a British officers, in the 1881 census. This was an obvious attempt to establish their distinct identity from the rest of the Hindu society. Both the factors were useful for their overzealous quest to win over these people to the Kingdom of the Christ, like many other animists they had converted elsewhere. It was finally in the 1931 census that these people were shown as separate from the Hindu society thus paving the way for their alienation from the national mainstream. Even when the Census Commissioners like Herbert Risley (1901), Census Officers P C Talents in Bihar and Sedgwick in Mumbai (1921) had stated that no line of demarcation could be drawn between ‘Hinduism’ and ‘animism’ and that separate mention of tribal religions should be done away with and the tribals joined with the rest of the Hindus.

Unfortunately, even today, the Government of India has contemplated to notify these tribal people as separate from the Hindu society by registering their religion in ‘others’ category in the coming 2011 census. This would be a dangerous trend for the entire Indian society as it would further widen the gaps that already exist.

Mahatma Gandhi was the only visionary who nailed this divisive game plan of this classification by British rulers. He said, “We are strangers to this sort of classification – animists, aboriginals, etc.- but we have learnt it from the English rulers. These tribals have from time immemorial been absorbed in Hinduism. They are like the indigenous medicine of the soil and their roots lie deep there.”

M S Golwalkar, the second chief of RSS, exposed the myth of animism in most candid and straightforward style. He said, “The argument of ‘animism’ is something which only an ignoramus who does not know the a, b, c of Hinduism would advance. The word ‘animus’ means the principle of life that is immanent in all creations. Whatever be its form of expression, it is that Inherent Spirit that is worshipped. Do not Hindus all over the country worship various trees? The worship of Nag, the Cobra, is prevalent throughout our country. Should we then term all these people as ‘animists,’ and declare them as ‘non-Hindus”?

Golwalkar also emphasized the good olden days of our history of the village Panchayat. The fifth member was always a Nishad, from the forests and from the janjatis. They were called as ‘Nishad’. Any decision of the panchayat was not complete without the consent of all the members including these ‘Nishad’.

On the other hand, the Christian missionaries were given a free hand to proselytize these people. In 1952 in C P and Berar 17,000 foreign-origin and 117,000 Indian-origin Missionaries were active. Thus, today we have a large chunk of these ‘Indigenous’ people converted to Christianity in sensitive border areas, followed by de-nationalization of these people. Many a problems the country is facing today have their roots in these activities.

A more careful study of the janjatis (I would rather use ‘janjatis’ instead of ‘tribal’ for these forest and hill dweller brethrens of ours) history would reveal the fact that these people were the staunch worshippers of Lord Ram and Lord Shiva. Their traditions are our traditions and as such their history is our history.

The British rulers studied the Hindu social situation prevailing then in the country and embarked upon a strategy to convert the weaker, neglected sections and janjatis to Christianity as part of the expanding and strengthening their rule over India. The multi-pronged policy they adopted for this was unique.

1. To declare that the janjatis were not the part of the Hindu society. They were the original habitants of this land driven away deep into the forests and hills by the invading hordes of Aryans.

2. To declare that they were also distinct from the rest of Hindu society because they follow animism and not worship deities like the rest of the Hindus.

3. To make them use Roman Script (since they did not have a script) and to preach Bible to them by translating stories from it, thus ‘creating’ literature for their dialect / language.

4. To give them an identity based on this ‘literature.’

5. To then instill a fear complex in them that their ‘identity’, is ‘different from the rest of the Hindu society’, and that it was in danger of getting swamped by the Hindus.

6. To emphasize that the janjatis are a different nation and that their nationality is overshadowed by the Hindus, who are in majority. Therefore, the janjatis should strive hard to get ‘freedom’ from the domination of the Hindus by demanding separated home land.

7. To instigate and support them to fight for preserving and protecting this ‘separate nationality’ by using all means of protest including violence under the cover of doctrinal misinterpretation of theology.

8. Another somewhat diabolical dimension has been added by the Missionary Network in the last thirty to forty years. This tribal identity is being now expanded as a Dalit-Christian-Muslim one with explicitly stated collaboration. Evidence can be presented aplenty. To add to the danger there is now a marriage of Marxist Philosophy of violence and the Church Theology widely known as “Liberation Theology”.

The unrest in Nagaland under the leadership of the late A Z Phizo or the violent movement in Mizoram under the late Lal Denga in the past, and at present the movements for separate Nagaland by NSCN(I) and various other splinter groups in the North-east India bear testimony to the fruits this strategy has borne.

Through the millennia they have striven to preserve their cultural, religious and social Hindu identity in its entirety. These hills an forest-people have played a crucial role in the freedom struggle, by helping Rana Pratap, Shivaji Maharaj, Rani Laxmibai, Vasudev Balwant Phadke, Bhagwan Birsa Munda, Rani Gaidinlui, Jadonang, Tantya Bhill and others. Their identity is invariably Hindu.