Total Views |
Budgam, September 01: The Jammu and Kashmir Police has recovered a 1200-year-old ancient sculpture of Goddess Durga from a local of central Kashmir’s Budgam district, who was looking to sell it.
After getting information about it, the Budgam police recovered the sculpture from the house of Nawaz Ahmad Sheikh son of Abdul Rashid Sheikh, a resident of Yarikhah Khansahab during the search. 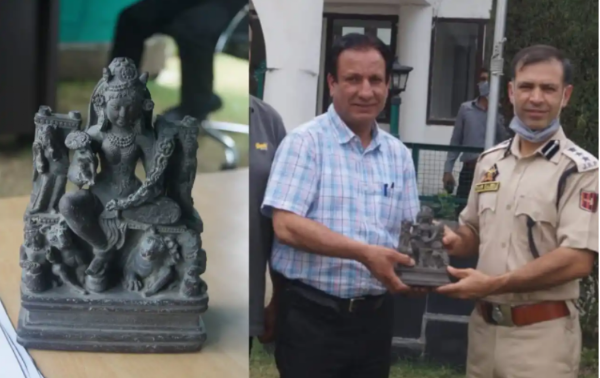 The sculpture is 12 by 8 inches in size, carved in a black stone. It shows Goddess Durga seated on a lion throne along with four attendants. While speaking with the local media, Senior Superintendent of Police (SSP) Budgam, Tahir Saleem Khan said that the ancient sculpture was recovered from a local in the Khansahab area in Budgam after getting reports that “he was attempting to sell it”.
Also Read | Pakistan at it again! Islamic mob disrupts Janmashtami function, vandalises Lord Krishna's idol
The sculpture was found in Jhelum at Pandrethan, Srinagar in Jammu, and Kashmir by the laborers who were extracting sand from the river on August 13.
"Pertinent to mention that the said sculpture was found from river Jhelum at Pandrethan, Srinagar by laborers who were extracting sand from the river on 13th August 2021, the J&K Police said.
Following that, the police called t a team of officers from the Department of Archives, Archaeology & Museums for examination of the recovered sculpture at district police office Budgam. “During the examination, it was revealed that the recovered sculpture of goddess Durga dates back roughly to 7th-8th AD (about 1200 years old)” the statement said.
Also Read |
PM Modi lays foundation stone for Parvati temple in Somnath; inaugurates multiple other projects
The sculpture which is in black stone has been now handed over to the Department of Archives, Archeology, and Museums, J&K Government by the J&K Police.
.
.
Hindu sculpture Jammu Kashmir J&K police Department of Archives Archeology Jhelum river Jammu Kashmir Durga