The terrorists had recently crossed over from Pakistan-occupied Kashmir (PoK) into the Indian side.

Uri, September 23: In the major development, the Security forces foiled a major terror attack and neutralised 3 Pak-sponsored-terrorists who had recently crossed over from Pakistan-occupied Kashmir (PoK) into the Indian side.

The terrorists were neutralised in a joint operation that has been underway for the last five days. They were eliminated in an encounter at the Rampur sector in Jammu and Kashmir's Uri district. The Indian Army has recovered 5 AK-47s, 8 pistols, and 70 hand grenades from terrorists killed in operation. 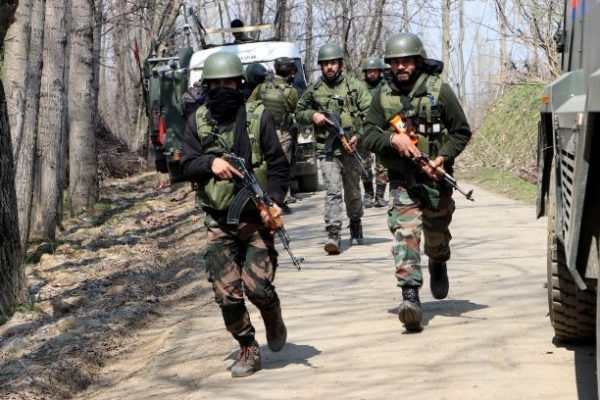 While giving the information about the operation, General DP Pandey, Chinar Corps Commander in a media briefing said, "In the early hours today, a movement was observed in Hathlanga forest, Rampur sector. In a brief operation, the attempt was eliminated, with the neutralization of 3 terrorists."
"We all are well aware this year the Army and Police are on a mission to give a chance to militants to come back to mainstream and surrender. Due to this Pakistan got frustrated to see the development. Pakistan handlers of militant outfits are on fire. They have operated and adopted modes of operandi to kill unarmed police and civilians via Pistol. This is a new trend by Pakistan to use Pistol in Kashmir as it is easy to carry out strikes," General DP Pandey said.
On the night of September 18, there was an attempt to infiltrate from across the Line of Control (LoC) in the Uri Sector. According to the Army, there were six terrorists and three were on the Indian side of the LoC while the other three were still on the Pakistani side of the fence. A massive search and combing operation was launched which continued for over three days. Following which the army suspended the internet and mobile phone services in Jammu and Kashmir’s Uri sector.
Also Read | Army launches search op in Uri after large infiltration bid
Meanwhile, intelligence agencies have issued a terror alert regarding the cross-border movement of Afghan-origin terrorists along with Pakistan-based terrorists in the Jammu and Kashmir region to execute terror activities in the country during the upcoming festive season. According to Intelligence agencies, they have got the input regarding the movement of Lashkar-e-Taiba, Harkat ul-Ansar (HuA), and Hizbul Mujahideen. The Pakistan-based terror organisations are helping Afghan-origin terrorists to enter India.
.
.
Indian army Uri Pak terrorist India Pakistan-occupied Kashmir