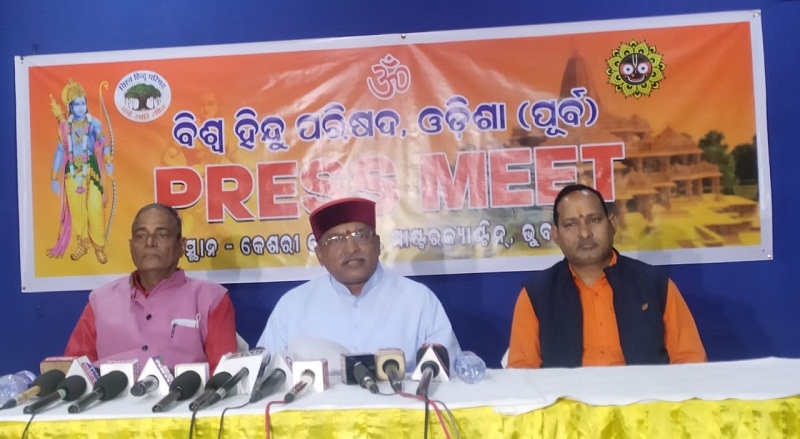 Bhubaneswar, Jan 10: Condemning the move of the government of Odisha to sanction financial assistance of Rs. 78,77,000/- to the Missionary of Charity on January 4, 2022 the Vishwa Hindu Parishad (VHP) General Secretary Milind Parnade said that this move endorsed the ‘anti-Hindu’ attitude of the state government.

Addressing a press conference here on Sunday Parande alleged that the Missionary of Charity has been engaged in amny doubtful activities against Hinduism. Granting such a huge amount to them the state government has shown that it cares nothing for the 96% of the Hindu population in the state, he said.

The amount sanctioned comes from the Chief Minister’s Relief Fund which is meant for financially helping the victims of natural calamities like flood, famine and cyclone; and cancer and heart patients. In no other state a charitable organization is given grant to such magnitude. There are innumerable Hindu charity organizations running orphanages, old age homes, widow homes, leprosy shelters etc. but the government has not considered them eligible for such a grant or financial assistance, Parande said and accused the government of using being favorable to the Christian Missionary organization.

It may be recalled that the Swami Laxmananda, who was doing service to the tribals and saving them from getting converted was murdered some years ago. It was alleged that the Christian Missionary organizations were part of the conspiracy to kill the Sadhu. However, the government of Odisha has not succeeded in apprehending the culprit even after a lapse of over a decade, Parande said and alleged that the state government failed to act in all its sincerity to give justice to the Hindu Sadhu.

The VHP appealed to the intellectuals and awakened citizens to condemn such partisan attitude of the state government.