Djokovic admitted making a false declaration on his travel form before entering Australia.

Australia, January 12: Serbian tennis star Novak Djokovic has admitted to breaking isolation rules after testing positive for Covid-19 last month, and acknowledged errors in his travel form. In an Instagram post on Wednesday, the tennis player admitted meeting a journalist for an interview, 2 days after he tested positive on 16 December. 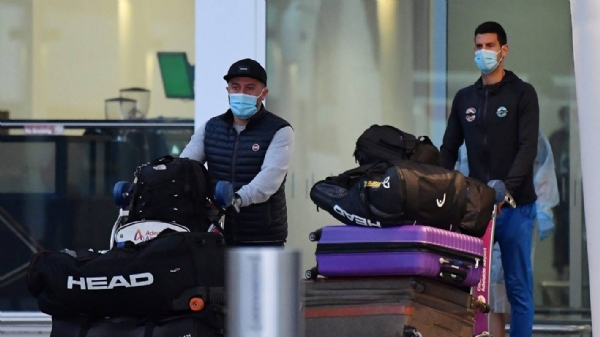 He wrote, "I accept that I should have rescheduled." His activity is being investigated as the Australian government is going over whether to deport him. In his post, he blamed his agent for making a mistake on his travel form that he had used to enter Australia.
Djokovic, who is currently unvaccinated, is hoping to defend his Australian Open title, next week. If he wins the title, which will be his 21st grand slam, he would become the most successful male tennis player in history.
His visa had been revoked on 6 January, after he arrived in the country amidst questions over the vaccine exemption that would have permitted him to enter. On Monday, a judge overturned the decision, and ordering his release from detention.
In his Instagram post, Djokovic said he did the interview, because he "didn't want to let the journalist down". He said that he socially distanced himself and wore a mask except when his photograph was being taken.
Also Read | Novak Djokovic held in ‘immigrant hotel’ at Melbourne
Djokovic admitted making a false declaration on his travel form before entering Australia. He said his agent made a mistake when filling in a section of the form covering his recent travel history. The form stated that he had not travelled in the 14 days before his arrival in Australia.
Australia's Border Force the nation's immigration officials, said that they were investigating whether he had made a false declaration, which would be grounds for a visa cancellation.