The temples that are clustered here are known as Tunks.

Have you ever seen any terrain so unique, where whichever way you look, you will see clusters of temples? What we are to explore today is a hill that is so unique that it is the world’s largest ever temple complex! The Palitana has to be one of the most sacred places of worship for the Jain communities across the world. Located in the Bhavnagar district of Gujarat, 214 kms south of Ahmedabad, the Palitana temples are believed to have been visited by 23 Jain Tirthankars. The cluster of Palitana temples comprises of 863 temples dedicated to the Jain gods. Who built these temples is still a mystery. But a lesser-known fact about the place is that the Palitana is the world’s only mountain having more than 900 temples! 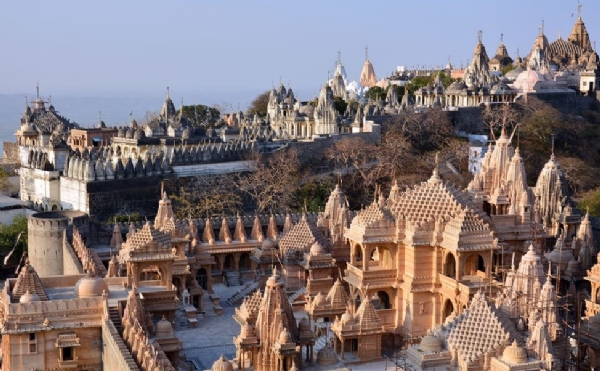 The majority of the temples are located on the Shatrunjaya hills. Pilgrims climb over 3500 stairs to visit the temples, situated at a height of 603 meters. The shortest route to the temple goes around the outer walls of the temples, passing the Angar Pir - the shrine of a Muslim saint who protected the temples during Muslim invasions.
History – This hill holds a pious place in the heart of Jains. The sanctity of the Palitana temples lies in the fact that as per Shatrunjaya Mahatmya, the holy Jain texts, the first Tirthankara, Rishabh, delivered his first sermon here and had successfully sanctified the hills. Later, his grandson, Pundarika is said to have attained his nirvana here in the Shatrunjaya hills. The hills are also said to have been visited many times by Bharata Chakravartin – father of Pundarik and half-brother of Baahubali. According to the mythology, a number of other tirthankaras are also said to have paid a holy visit to these hills, making it all the more sacred.
Architecture - Most of the architecture of Palitana, built in the 11th century by Solanki dynasty, was destroyed by Muslim invaders. The structures standing today were built in 16th century and the temples destroyed during the invasion were reconstructed by wealthy merchants of that region during the time. Palitana cluster of temples is vast, including both big and small shrines. The larger ones have marble halls with columns and towers, and a lot of openings. The smaller ones are as small as 3 square feet, with representations of emblems of the Tirthankaras.

The architecture of the Jain temples includes very rich, heavy ornamentation. The usage of materials like the marble has been thought through in such a way that the sunlight falling on the marble structure transforms its appearance as an ivory shield. The temples that are clustered here are known as Tunks.

It is also believed that this temple town is an abode for the divine. Due to this, no one is allowed to stay overnight, including priests. The most prominent temple of Palitana is the Adishwar Temple. This Tirth sthal for Jains is made out of marble, with finely carved interiors.
Also Read | Meenakshi Temple – the majestic temple in Madurai dedicated to Parvati
The finely carved interiors are brought to life by geometric lace designs, elaborately carved ceilings, and clustered forms of canopies. The marble image of the deity is adorned with gold ornaments studded with precious jewels.
Approaching the temple is considerably tough, having a flight of around 3500 steps leading up to it. Sling chairs have been made available for those who find it difficult to climb stairs. Even if such facilities are available, the rules for climbing the stairs are very stringent - food can’t be eaten, nor carried on the way. The descent should start before evening, as staying in the temple during the night is prohibited.
Palitana Gujarat Ahmedabad temple clusters Jain temple