I wish I could have greeted my Christian friends in a more friendly manner on Christmas Eve. We have a huge number of patriotic Christians who hate foreign interference in the lives of Indian Christians and how to oppose the urge to ‘save souls’ of sinners who don’t follow Christianity.

We shall be celebrating Christmas that has seen evolution of Jesus (God bless him) from a dark Middle East citizen to white son of God with rise of European power to various other avatars, including Buddha, Krishna, Yogi and Vishnu with his own sahasranaamam and fake yoga thus appropriating various ‘ignorant sinful pagan’ cultures’ festivals from Santa Clause to abominable customs and traditions of natives like ‘Hindoos.’

I recently came across a lengthy NYT article shedding copious tears about persecution of Christians in India and the way they are frightened by right wing ‘Hindu nationalists’. It has some anecdotal cases from Central India from the tribal belt and a city close to this tribal belt. Then this story is expanded into a general story of Christians being beaten up, scared and called names. These rudaali (cry baby) acts began in around 2010 and gained strength since 2014. 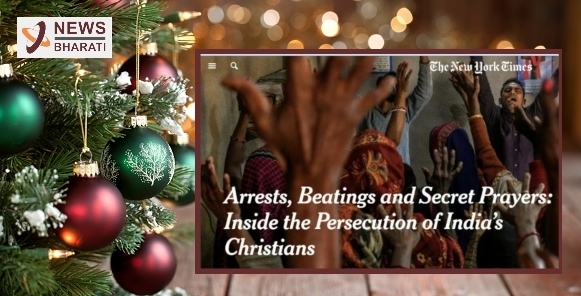