Vijay Stambha: The pride of Chittor built by Rana Kumbh celebrating the victory against Mahmud Khalji

The highest storey of this tower consists of an image of the Jain Goddess, Padmavati.

You must have seen many historical sites in our country which have left you in awe. But you must never have come across a building so majestic and beautiful as this one, having history etched into every inch of it. The Vijay Stambha, also known as victory tower, is a piece of resistance of Chittorgarh. It is located within the complex of Chittor Fort in Rajasthan. 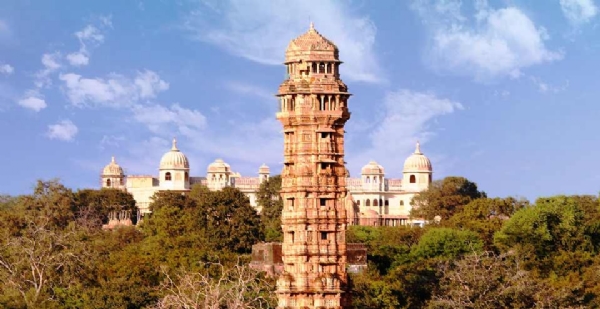 It was constructed was constructed by the Mewar King Rana Kumbha to honor his victory over the combined force of Sultan Mohammad Khilji of Malwa and Sultan Kutubuddin Shah of Gujarat in 1446. The tower was constructed between 1458 and 1488. It is so tall and massive that it is visible from any part of the city! Which also means, the entire town can be viewed from here.
Vijay Stambh is a dedication to Lord Vishnu. It has intricate carvings and sculptures of Hindu Gods and Goddesses. The internal part has carvings of weapons, musical instruments, and tools used in that era. It is an ideal example of religious pluralism practised by Rajputs. The highest storey consists of an image of the Jain Goddess, Padmavati. This magnificent tower is a piece of architecture that is frequented by tourists visiting here, making them proud of the vast history of the country!
Architecture – The tower is constructed out of red sandstone and white marble, and has a balcony on every storey. It is constructed in the Rajasthani style of architecture. The tower is 9 storeys tall, with a height of 37.19 meters and a base height of 3.0 meters.
To reach the top of the tower, you have to climb up a circular staircase, having 157 steps. No wonder the top of the tower has an enthralling view of the entire city! As twilight sets in, the gleam of the citylights seem to magnify the glory of the historic tower, leaving the viewer in awe.

The word Allah is carved 9 times on the third storey, and 8 times on the eighth storey, in Arabic. The topmost floor of the tower contains inscribed slabs featuring the lineage of the Rajput rulers of Chittor. Inscribed here, are also with their glorious deeds, ascribed to Atri - the court scholar of Rana Kumbha, and his son Mahesh. Even though it is officially named as Vijay Stambha, it is actually a Kirti Stmabha, or a tower of fame.

Sutradhar Jaita and his sons Napa, Puja and Poma have been the architects of Vijay Stambha. You can see their portraits on the 5th floor of the tower. Jai also was the scholar of the court of Maharana Kumbha.
Also Read | Meenakshi Temple – the majestic temple in Madurai dedicated to Parvati
History – Mewar had lost its significance, when at the turn of the 13th century; it was overtaken by the armies of Alauddin Khilji. Many years later, after the assassination of his father, Rana Mokal of Mewar by his nobles in a palace conspiracy, Rana Kumbha (Kumbhkaran) became the Maharana of Mewar in 1433 AD, at the age of 16. During his reign, Sultan Mohammad Khilji of Malwa started attacking on Mewar.
After destroying the Bana Mata temple when he started for Chittor, he was intercepted by Rana Kumbha. The first day of the Battle of Mandalgarh ended in a stalemate, the next day, Sultan was defeated and was forced to retreat. However, he did not stop there. He arranged his army, and invaded Mewar again in 1446. But when crossing the Banas river, Rana Kumbha surprised his army by a sudden attack and defeated the Sultan completely, once again.
Vijay Stambha Mahmud Khalji Chittor Chittorgarh Rajasthan Rana Kumbh