5 coaches of the train overturned in the accident among the 12 that were derailed. 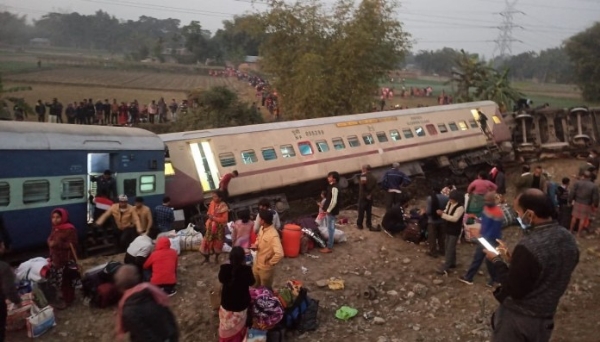 According to reports, 6 passengers have been confirmed dead and the number of injured people were 45 in the accident. As soon as the information of the incident was received, locals reached the spot, starting relief work.

5 coaches of the train overturned in the accident among the 12 that were derailed. The speed of the train at the time of the accident, was 40 kmph. Visuals of this accident show coaches lying sideways / overturned near the track. At least one coach had climbed onto another one.

Issuing a statement, the Railways said, “12 coaches of the Guwahati-Bikaner Express train were derailed. DRM and ADRM have reached the spot. A medical van has also been sent.” Preliminary assessment suggests a possibility of a crack in the railway tracks, which might have caused the accident.

Also Read | Unfortunate incident! 12 dead, 14 injured in a stampede in Vaishno Devi shrine
Railway minister Ashwini Vaishnaw informed that he was monitoring the situation for quick rescue operation. He announced an increased ex-gratia amount of Rs 5 lakh in case of death, Rs 1 lakh for grievous injuries, and Rs 25 thousand for minor injuries. The injured were being taken to the Mainaguri and Jalpaiguri district hospitals.
train derail West Bengal accident Jalpaiguri