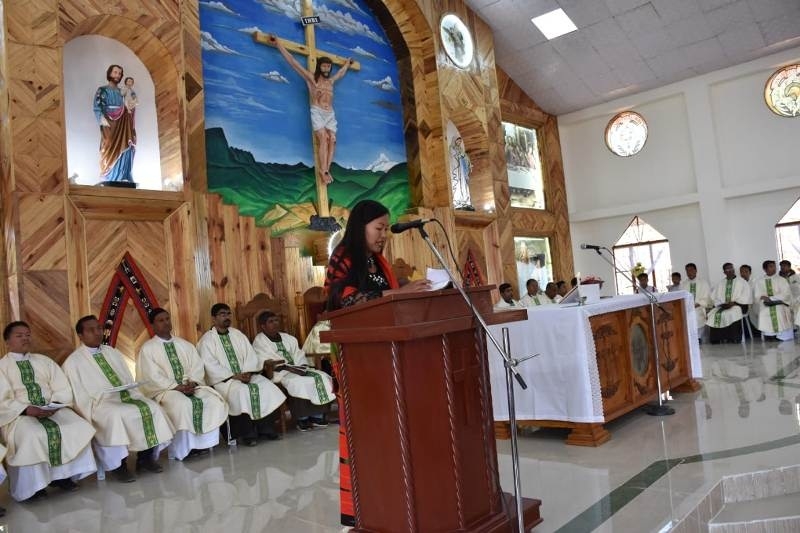 A Catholic Church in Manipur.
New Delhi, Jan 14: Christian leaders of Manipur, a northeastern state of India that will be going to polls to elect new assembly on Feb 27 has urged the Election Commission of India to shift the polling days to other than Sundays as Sunday happens to be the ‘day of worship and rest’ for them.

Manipur is among the five states that will be going to elect their respective assemblies by March 10. The state will be witnessing a two-phase assembly election to elect the 40-member assembly. The polling will be held on Sunday February 27 and Thursday March 3.

The demographic structure of Manipur has a sizeable presence of converted Christians, mostly tribals. Therefore, the Christian leaders and student unions have requested the Election Commission of India (ECI) to ‘adjust’ the polling day on Sunday falling on Feb 27.

The ECI has announced the detail election schedule on January 8 for five states of UP, Uttarakhand, Punjab, Goa and Manipur. As per the ECI schedule the polling will be held in Manipur in two phases i.e. on Feb 27 and Mar 3.

Noting that the first phase of polling falls on Sunday, the All Tribal Students’ Union Manipur (ATSUM) and Kuki Inpi Manipur (KIM) have requested the ECI to reschedule the polling to any other ‘convenient’ date leaving the Sunday untouched.

The ATSUM statement issued on Jan 10 said that the scheduling of the election on Sunday was a ‘matter of concern’ for the tribal people and the Christian community in the state.

ATSUM Secretary K. Doungel said, “The state predominantly consists of ‘tribal Christian’ who account for 43% of the total population of the state of Manipur. Sunday happens to be ‘holy’ and ‘sacred’ day for them besides being a day of ‘worship and rest’.

He alleged that the ECI lacked “the ability to appreciate the spiritual values, beliefs and practices of the Christian community. Its apathy is in fact ‘antagonistic”, he said. He further added that like any other faith they too have the constitutional right to profess and practice ‘our faith’ while requesting the poll panel to change the first phase polling date.

The ATSUM said that holding election on Sunday would prevent many eligible voters from exercising their franchise.

Spokesperson of Catholic Church in the Northeast India Father Felix Anthony in conversion with the UCA News said that the ECI “should have taken special care and attention while scheduling the election program”. It should have been more sensitive, he added. Christians have an obligation to attend Sunday services and scheduling a poll on that day will affect their voting, he said.

Shokholun Mate, general secretary of KIM, said there were “serious objections and complaints” as the decision to hold polling on a Sunday was bound “to hurt the religious sentiments” of the state’s Christian community.

Christians make up 41.29 percent of Manipur’s population of 2.85 million, according to the Census of India 2011 report. Christians are a majority in five out of nine districts of the state.