Under the leadership and guidance of Prime Minister Narendra Modi ji, Yoga and Surya Namaskar is being promoted for the wellness and health of mankind 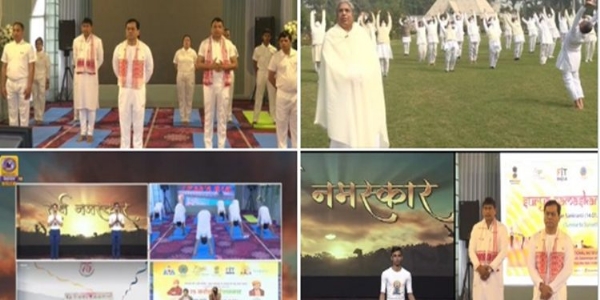 
In his inaugural address, the Union Minister said, "Sun worship is done through Surya Namaskar to improve the physical and mental well-being of people. Under the leadership and guidance of Prime Minister Narendra Modi ji, Yoga and Surya Namaskar is being promoted for the wellness and health of mankind."


In this virtual event, many leading Yoga Masters and Yoga enthusiasts from all over the world joined, demonstrated Surya Namaskar and shared their views on Surya Namaskar. Yoga Guru Baba Ramdev said that the Surya Namaskar movement aims to make people aware of the basis of life force. Yoga means to unite people and we are doing the same by uniting more than 75 lakh people performing Surya Namaskar together.


Art of Living founder Sri Sri Ravi Shankar said that the energy of the sun awakens the immunity within us, which can save us from this global epidemic. Sadhguru Jaggi Vasudev, founder of Isha Foundation, said that everything in the world is governed by the energy of the sun. Performing Surya Namaskar daily improves physical and psychological health.


2021 Miss World Japan Tamaki Hoshi also joined virtually. She said that this initiative taken by the Ministry of AYUSH, Government of India is proving to be very beneficial for every human being in these pandemic times. A large number of people in Japan are also performing Surya Namaskar and many have included yoga in their daily routine.