New Delhi, January 15: Prime Minister Narendra Modi on Saturday wished soldiers, veterans, and their families on the occasion of Army Day. Acknowledging the bravery and professionalism displayed by the Indian Army, the PM said, words can’t do justice to their invaluable contribution towards national safety. 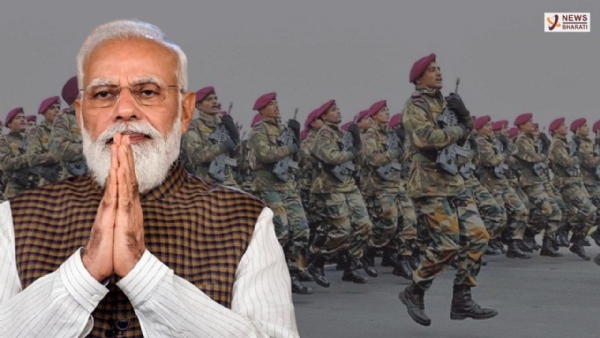 PM Modi said in a tweet, “Best wishes on the occasion of Army Day, especially to our courageous soldiers, respected veterans and their families. The Indian Army is known for its bravery and professionalism. Words cannot do justice to the invaluable contribution of the Indian Army towards national safety.”
India celebrates Army Day on January 15 every year, acknowledging the importance of the Indian Army and honour the sacrifices of soldiers. In 1949, on this day, Field Marshal Kodandera M. Cariappa's took over as the Commander-in-Chief of the Indian Army from General Francis Bucher, the last British Commander-in-Chief of India.
The PM added on twitter, “Indian Army personnel serve in hostile terrains and are at the forefront of helping fellow citizens during humanitarian crisis, including natural disasters. India is proud of the stellar contribution of the Army in Peacekeeping Missions overseas as well.”

On Friday, Army Chief General MM Naravane asserted that the Indian Army stands firm to counter any attempt to change the status quo along the country’s border, saying India's desire for peace is born out of strength and should not be mistaken otherwise.
Army Day PM Modi Indian Army