What is the significance of Uttar Pradesh and Punjab State Assembly Elections 2022?

The ongoing no-holds-barred vicious game/drama of politics played by rival political leaders and parties is the sum total of inherited historic cultures of treachery and intrigue of the most despicable order contrary to real democracy and national security interests.

Aam Admi's elsewhere, as bystanders and spectators, understand the significance of final results of Uttar Pradesh and Punjab State Assembly Elections on 10 March 2022. Ipso facto, their outcomes may determine the future stability and security of modern India. As per media highlights, the vicious battle lines are drawn between "Development vs. Corruption", "Mandirs vs. Mandal (Social Engineering)", "Peace vs. Mafia Raj", "Democracy vs. Dynast", jobs and unemployment etc.

Ironic but real, politics is trumping economics and other elements of national security. Two views, out of many imponderables, best sums up the challenge of predicting poll outcomes: the phrase attributed to British Prime Minister Harold Wilson in 1964 "A week is a long time in politics"; and, "48 hours before the voting day - silence period with no active campaigning allowed" determines final poll outcomes based on behind the curtain manipulations. 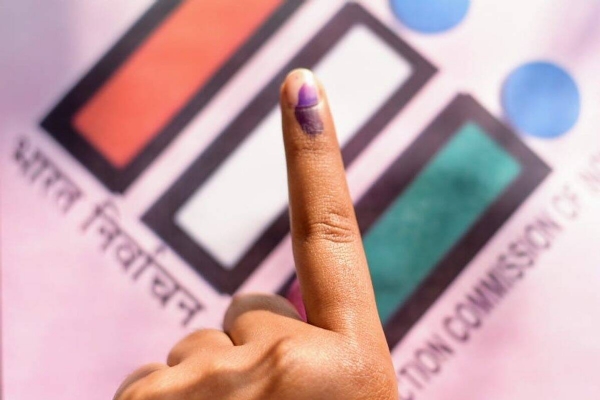 Media and intellectuals may compare data of Akhilesh Yadav 5-year rule performance with the 5-year rule of Yogi Adityanath performance for the voters to make the right choice. Turncoats or opportunists - Aye Rams, Gaye Rams - are making bee-line in pursuit of better electoral prospects. In today's context, no laws are in place barring "Turncoats/Opportunists" from contesting elections. So, it is left to the voters as judges and jury to give a fair and just verdict.

Media is partisanship depends on their linkages to domestic and alien patrons. Selective amnesia is deliberate in their coverage. Instead of news providing the true picture, media anchors cover news skewed to favor their patron's interests. For TRP ratings, the media sensationalizes and twists politics in the most bizarre ways. Add to it, No-holds barred vicious social media. Information-cum-influence campaigns are making every attempt to win over audiences. None is concerned about its fallout on the psyche of voters on highly confrontationist and divisive lines.

Economic growth and crime data are available - GDP and GDP Per Capita and National Crime Bureau Records - in public domain. Surely, the media can provide news most accurately.

What is the root cause for such vicious politics to prevail? Indian inherited cultural heritage - corruption, treachery and intrigue, Dharma and Adharma, idealism and realism, insular isolationism, multi-linguist, multi-radicalism, multi-communalism and multi nationalism - continues to hold sway over emotions and sentiments of people. Since it is "Kaliyug Age", they predominate and sway the voter's choices particularly during the last 48 hours prior to voting day due to factors like money, muscle power and liquor.

Corruption is the most sinister internal security threat to democracy and the nation. Every single Prime Minister since the days of I. K. Gujral in the 1980s had been highlighting the threat of corruption engulfing India from the "Ramparts of Delhi Red Fort" on 15th August. A B Vajpayee had even invoked "Zero Tolerance against Corruption". Even Manmohan Singh, who presided over the most corrupt regime, on his seventh Independence Day address to the nation, expressed concern over rising corruption in the country. He urged the nation to unite against corruption. Yet, there have been no major breakthroughs in containing and deterring corruption.

The list of scams is also available in the public domain, particularly in UP and Punjab. As per CAG Report of UP in 2018, the Akhilesh Yadav-led government allowed irregularities worth Rs 97,000 crore under various departments. The illegal sand mining mafia scam during the SP rule (2012-2017) made headlines. According to CBI FIR, Akhilesh Yadav had approved 13 mining leases on a single day in his capacity as Chief Minister-cum-minister for mines. The CBI has filed F.I.Rs against 14 suspects after seizing incriminating evidence in 14 locations in 7 cities across Uttar Pradesh and Delhi in 2019. Add to them hundreds of "Cow Mafias" and illegal slaughter houses. In Punjab too, drug and sand mafia's.

Transparency International’s latest Corruption Perceptions Index, India has slipped six places from 80th to 86th among 180 countries in 2020. Media surely can provide the comparative data of list of scams in the election bound states of various political parties to facilitate the voters to make the right electoral choices.

Laws may be drafted, ratified and implemented, but unless they are enforced without pity and remorse on perpetrators of peacetime corruption crimes, there will be no hope in posterity for its containment and restoration of probity in public life. Such a prospect appears a forlorn hope.

Since society is besieged by corruption, a Cultural Revolution alone can redress the problem. If people, the watchdogs in democracy, remain mute spectators or active abettors, the crime of corruption cannot be contained. Such an initiative is yet to be sighted on the horizon despite all the media hype generated over corruption.

Next, the "Dynast" inheritance syndrome is real in the name of democracy. Neo-Maharajahs are all over. Most vicious is their character and behavior. I-Me-Myself-My Progeny obsession is phenomenal. There are many "Narad's" and "Mama Sakunis" in the grab of political leaders. And, they have mastered the art of spinning every trick in the trade of speculative rumors and stories against their rivals exploiting the visual, print and social media networks. Lesson of Indian history is "vicious internal rivalry paved the path for external intervention - Slave rule of Muslim invaders and British imperial colonialism.

To understand the realities of vicious politics, one needs to understand the inherited historical-cultural heritage. In the past, geographical insularity had bred distinctive races and cultures. People of different colors, creeds, classes and cultures did live either in an atmosphere of confrontation and conflict or co-operation and consensus - in a state of equilibrium.

Ipso facto, monarchy and feudalism prevailed in our ancient or medieval history. Actually, serfdom was universal for the majority. So, ancient Indian culture perpetuated unique negative values. Meekness represents the negative face of tolerance. Narcissism is the fallout of the caste system.

Traditionally, ‘rulers’ and their henchmen were the parasitic class. They lacked work ethic. They romanticized hierarchy and authority to spread awe among subjects. Their interests took precedence over the interests of the ‘ruled’. Hunting expeditions or drinking or hosting vulgar cultural events is the pastime of leaders today. Gangsters and mafia raj on the pay rolls of Neo Maharajah's spread awe and fear.

In sum, sacrifice and service is the burden for the people to bear and the rulers to enjoy. The young cannot dare to question the wisdom or follies of the elder. The place of women, as beasts of burden, is a traditional inheritance.

Next, comprehensive data of crimes of all types can be easily accessed from the National Bureau of Crime Records. Most importantly, Uttar Pradesh was known for caste and communal polarization - majority and minority - instead of promoting harmony and peace. In reality, diverse societal pulls are tearing apart polity. In the past, many power centers co-existed and competed in an endless folly of confrontationist and conflicting dynamics.

Viewed in the above realities of complex vicious electoral politics, can the voter rise above his narrow parochial and sectional interests and exercise his vote in favor of honest, fair and just leaders and parties to promote peace so vital for progress, prosperity and communal harmony? It is the real issue that needs to be addressed. Voters are the best judges to determine electoral outcomes and set the trends for the nation to traverse in 2024 - ensure political stability or usher chaos and anarchy??

The root cause for prevailing anarchic conditions is, therefore, easy to trace. The Constitution opened the windows of opportunities for historically deprived sections of society to lay claims to their status as equal citizens. Majority are wilting under pressure of Islamic, Christian and other religious cultures. The new religions have made tremendous progress and consolidated their influence in the society, but their fusion or assimilation has failed to materialize. After all, the fusion of traditions and modernity, particularly in pluralistic societies separated by ages, is not easy to forge.

Today, we are in "Technology Age". The upsurge of individualism is the fallout of twin revolutions - information revolution and growing aspirations. No wonder, pluralist society is emerging increasingly exclusivist - new pluralism. So, they want to make clean break from the shackles of slavery by disassociating themselves from inherited cultural legacies like mythological epics, cautious fatalism, Karta and Karma, stratified caste system and tolerance. But, the challenges of many faces of new pluralism are least understood by majority.

Be that as it may, high moralistic orientation and pretensions by political leaders and parties remains a façade only. The current crops of Indian political leaders do not believe in "Altruists" ideology. Majority alternate between "Nihilists of Nietzsche and Realists of Machiavelli" schools.

As per Nietzsche, the ideal of equality is a myth - for humans are never born as equals; the ideal of happiness is only fit for animals; truth is not absolute; humility and meekness are virtues fit for slaves; and pity is the offspring of cowardice. Nietzsche felt that such traits represent weakness. For him, boldness, pride and self-assertion are manly virtues of a high order. They should govern personal and regime outcomes.

Machiavelli's prescription for the rulers is simple. Rulers should have no other objective or no other concern, nor occupy themselves with anything else except war. For them, there is no room for morals. After all, for politicians the permanent deepest desire is the desire for security or self preservation - a necessary selfish, aggressive and acquisitive desire in a world where all cannot survive. To survive in the wolfish politics of current day politics, they resort to every means to survive - aye ram, Gaye ram is but natural. For them, realpolitik dictates the course of ethics, morals and values.

Ethics, morals and values are the least consideration for political leaders and parties. Their self interests are supreme. Every other consideration is subordinate to it including national security interests. Power and status takes precedence over sacrifice and service. After all, it is a centuries-old inherited legacy. Prudence, honor, courage, honesty and fairness are anathema to political leaders but for a few.

Neo Maharajah's and Feudalists are in pursuit of restoration of status quo ante. People adore embellishments conferred on account of status and hierarchical position at all levels - fortress type palaces, bullet proof vehicles, and gunmen. They are least interested in societal unity and peace. A genuine social transformation can alone create the right mix of tradition with modernism, which is the need for posterity. It implies a clean break with the past.

Modern Indians are also yet to overcome their obsession with subservience of the monarchical and colonial rule: “Ji Huzur (yes sir)”, “Dora (Lord)”, “Sircar (Ruler)”, “request please”, “most obedient servant” and so on. They truly reflect peoples slave culture or low self-esteem. Its fallout is lack of human concern for subordinates.

In sum, the ongoing no-holds-barred vicious game/drama of politics played by rival political leaders and parties is the sum total of inherited historic cultures of treachery and intrigue of the most despicable order contrary to real democracy and national security interests. Yet, hope rests on people's sagacity on the final date of voting in the battle of the ballot box. After all, the adage "Prajale Prabhuvulu or People are the rulers" offers hope to set the future course of the nation on an even course of peace, progress, prosperity and harmony. The least the voters must do is to throw out the Neo-Maharaja's, corrupt leaders and dynasts.

As spectators/bystanders, all one can do is hope for the best.
Uttar Pradesh Punjab State Assembly Elections Yogi Adityanath Charanjit Singh Channi Akhilesh Yadav