The movie beautifully captures the life of a young boy ‘Prabhat’, who follows his dream and desire, but destiny has some other plans for him for which he went on a different path

Mumbai, January 18: Nowadays the theme considered in the movie has widened its outlook. The film maker just doesn’t want entertainment to give to the viewers, but much beyond that. They want a theme in the movie that would make the viewer say in excitement that ‘Yes, this is it!’. This is worth watching with family, that will generally widen the child perspective. The child will not just entertain him in those 3 hours of movie, but also be inspired by the movie and he would hence try to have new move in his life. Cinema has a huge impact on people and children. We try to imitate what is portrayed in the reel life in our real life. 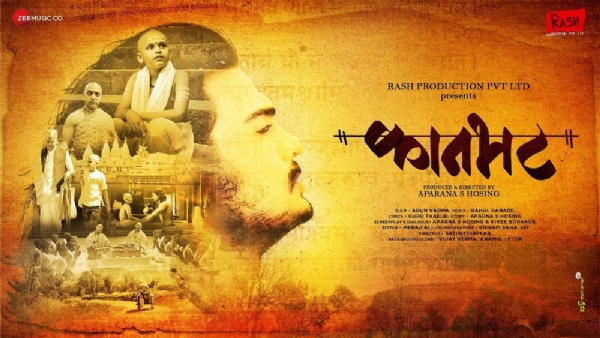 Marathi movie Kaanbhatt is a great movie, seriously an inspiring slot. This is the kind of movie that can be viewed by everyone, regardless of the age. The movie beautifully captures the life of a young boy ‘Prabhat’, who follows his dream and desire, but destiny has some other plans for him for which he went on a different path. The story depicts the relationship between Ved and Science. He was great strugglers in his life. The movie has portrayed a beautiful lesson to everyone that every child is different and have different needs in this world.

On the other side recently Filmmaker Mahesh Manjrekar released the trailer of upcoming Marathi Movie "Nay Varan Bhat Loncha Kon Nay Koncha". The trailer of this film itself seems to indicate that such a low-quality art may not have been produced in the history of Marathi cinema. Its trailer shows absolutely incorrect scenes and dialogues about the women and children of mill labourers. We wonder if it is the same Mahesh Manjrekar who has played the role of Chhatrapati Shivaji Maharaj in the film ‘Mi Shivaji Raje Bhosale Boltoy’ and raised the self-esteem of Maharashtrians. There are many things such as filthy abuses, juvenile delinquency, obscene scenes with children in the trailer. After watching the trailer, people all over the country including Maharashtra are expressing intense rage. The National Commission for Protection of Child Rights, the National Commission for Women and the State Commission for Women (Maharashtra) have also objected to the film and demanded action from the Central Board of Film Certification and the Police.
Also Read | Marathi Movie 'The Disciple' wins Best Screenplay at Venice Film Festival
Commenting on this Producer and Director Aparana S Hosing Said, "Marathi cinema is known for its content-based movies. This industry has received appreciation when trying different, rarely it criticised as happening with mahesh manjrekar’s recent film. Wrong or right is debatable but a lot depends on trade and those who control the trade. A children film can range from child education to sexual abuse but trade it seems is more interested in Sexual and abusing content and the audience on the other hand support both while keeping an emotional connect with the first type. Kaanbhatt movie was highly appreciated by family audience and international film festival, but not so warm acceptance by so called sitting on top of heirarchy in trade. It’s not just about director a lot depends on the commercial aspect of the film and we have to see through that also".
We need more movies like Kaanbhatt to educate our child.
Kaanbhatt marathi movie