Today, the kidnapper dropped the boy with a security guard of a building in Punawale and asked him to look after the boy for some time

Pune, January 19: A week after he was kidnapped from Balewadi, 4-YO Swarnav Chavan was reunited with his parents today. However, the kidnapper is yet to be identified. 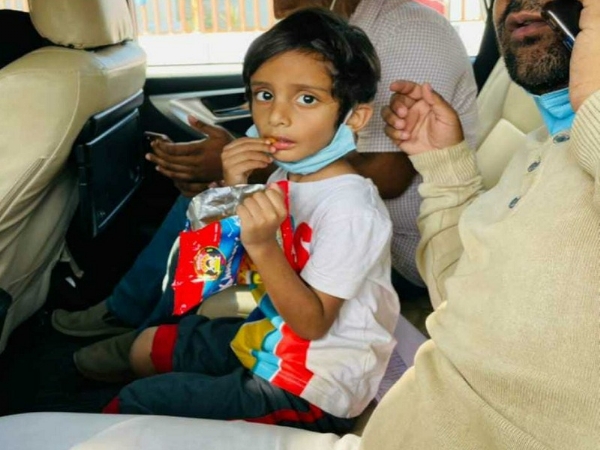 Swarnav was kidnapped on January 11, while going to his playschool 10 am. The CCTV had captured a 2-wheeler rider taking him away. His parents searched for him, but then they registered a complaint with Chatushrungi police station, Pune city police.
However, even after a week, the police could not trace him. Many shared his photo on social media to spread awareness about the case. Over 300 policemen were working on the case to find the child. A missing case was filed 8 days ago but the exact reason of kidnapping is yet not found.
Today, the kidnapper dropped the boy with a security guard of a building in Punawale and asked him to look after the boy for some time and he will be back in 10 minutes. However, he did not return.

Also Read | The Surat Model serves justice by expediting trials under "The POCSO Act"
As the child started crying, the guard found a phone number in his bag and informed his father who contacted the police. They reached the spot and brought Swarnav home.
Meanwhile, local security guard Dadarao Jadhav made a video call to the number to ascertain whether the boy belonged to him. The boy’s family informed the police and reached. Joint Commissioner of Police (law & order) Ravindra Shisve of Pune city police said that investigation is going on to nab the kidnapper.
Swarnav Chavan Kidnap Child Pune