1,500 e-buses to be deployed under Delhi Transport Corporation

CESL launched the biggest ever tender worth about Rs. 5,500 crore to procure 5,580 e-buses, including 130 double-decker ones.

New Delhi, January 22: The Delhi government will soon deploy 1,500 electric buses under the Delhi Transport Corporation(DTC) as it aims at 100% electrification of the public transport fleet, said minister Kailash Gahlot. 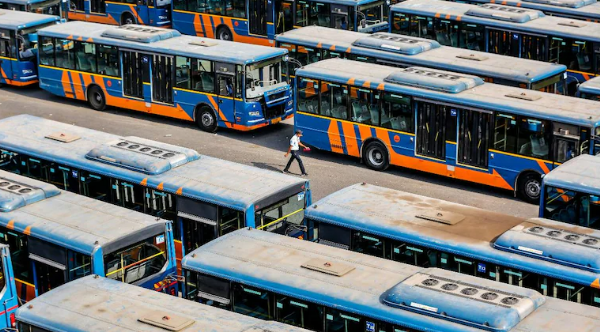 The Central government agency Convergence Energy Services Ltd (CESL) launched the biggest ever tender worth about Rs. 5,500 crore to procure as many as 5,580 electric buses, including 130 double-decker ones.
Gahlot said in a tweet, "Under Hon'ble CM @ArvindKejriwal's vision, we're committed to achieve 100% electrification of buses. #DTC will soon be deploying 1500 #ebuses as part of #TheGrandChallenge. @ConvergenceCESL has announced RFP today. Delhi will be the 1st state to adopt #ebuses at such scale."
Through the 'Grand Challenge', CESL aims to deploy 5,450 single-decker buses and 130 double-decker ones in 5 metros. The first lot of e-buses are expected to hit the roads by July this year, a statement said.
Also Read | NITI Aayog launches ‘E-Sawari India E-Bus Coalition’ in tie-up with CESL
Delhi CM Arvind Kejriwal flagged off the first e-bus of DTC being procured separately, and added that 300 more such buses will join the city’s public transport system by April. He also said that 2,000 electric buses will be procured by the government in the coming years.
Delhi Transport Corporation e-bus electrification DTC Delhi