CM Sawant will be the BJP"s candidate from Sanquelim, deputy CM Manohar Ajgaonkar will contest from Margaon.

Panaji, January 22: Former chairperson of Sanquelim Municipal Council Riyaz Khan has recently declared his support to Chief Minister Pramod Sawant in Sanquelim constituency. This comes as a huge blow to the Congress candidate Dharmesh Saglani who was a close aid to Khan. 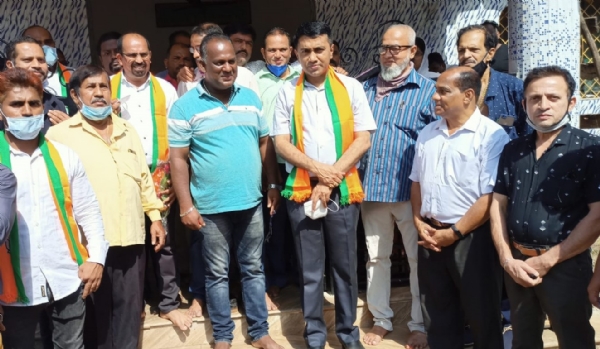 Meanwhile, the BJP released the names of 34 candidates for the upcoming assembly elections in Goa. CM Sawant will be the BJP's candidate from Sanquelim again, according to the list announced by the party general secretary Arun Singh along with the state's poll in-charge Devendra Fadnavis. The deputy chief minister Manohar Ajgaonkar will contest from Margaon.
Announcing the candidates, Fadnavis said, the BJP ushered in a new era of development Goa in the last 10 years while ensuring stability. The elections for the 40-member Goa Assembly will be held in single phase on February 14.
With the entry of the AAP and TMC in the poll arena, the election is expected to be multi-cornered this time.
Also Read | Goa polls: CM Pramod Sawant to contest from Sanquelim
As per the schedule announced by the Election Commission, the polling for all five states will be held in seven phases, with the first phase commencing from February 10.
Goa polls BJP Riyaz Khan Pramod Sawant