No one can deny that Kathmandu is a sheer beauty in itself, and is likely to steal your breath away, everywhere you look. Let’s explore a temple here today, which is so breath-taking, you will want to visit is right away. Considered to be one of the finest stone monuments in Kathmandu, the Krishna Mandir in Patan Durbar Square is built in the Sikhara architectural style which is found commonly in India. 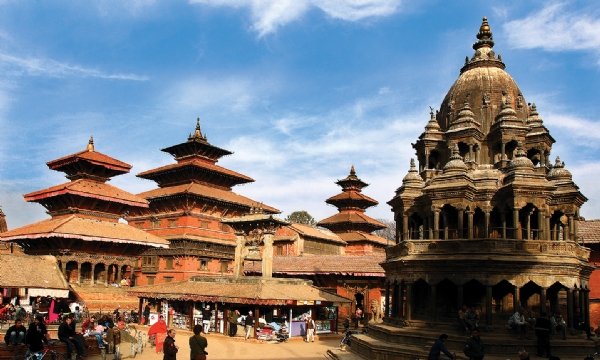 The temple was established in 1637 AD, and is a replica of another Hindu temple of Lord Krishna, located in Mathura, by Siddhi Narsimha Malla of Patan. This temple is fully made out of stone. The carvings are finer than the ones of the other Krishna temple at Patan Durbar Square, built in 1723 by Yogamati - Siddhi Narsimha Malla’s great granddaughter.
Under its 21 golden pinnacles are 3 floors. The first floor has Lord Krishna, the second Shiva, and the third Lokeshwor. Scenes from the Ramayana narrated in Newari script decorate the interior of the temple.
Inside the temple - The temple merges 2 very distinct styles - the solid southern Gupta Sikhara form and the open multi-storied style of Moghul. There are stone carvings of several gods and goddesses on the passage of the temple. The first floor of the temple has stone images of Lord Krishna and his two consorts Radha and Rukmani. It is also the main area of worship. The second floor contains the image of Lord Shiva and it is said that the third floor which is empty now, that used to have a statue of Avalokitesvara - a collective consciousness of all Buddhas.
Structure - The structure of the Krishna Mandir follows the Indian Subcontinental architectural style known as the Shikhara style. Highlights of this style of architecture are the structure that spirals up from the temple’s roof above the sanctum. It follows the traits of a local Nepali style called Granthakuta. 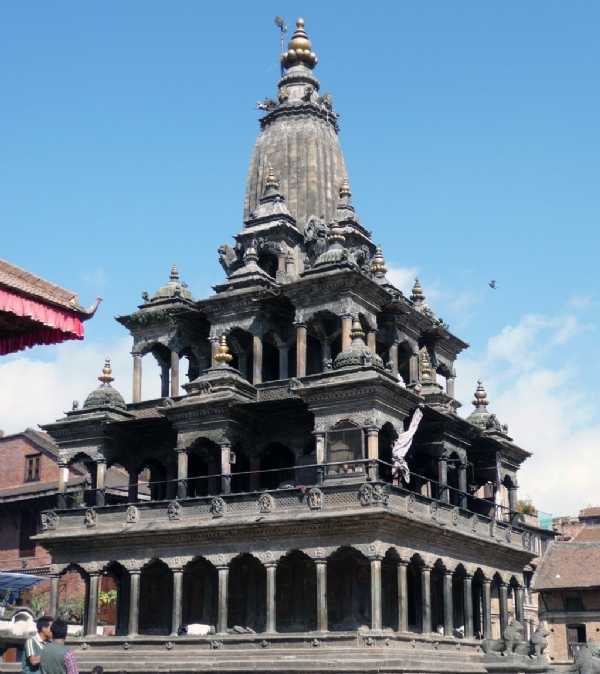 From the courtyard, you can witness the story of Mahabharata depicted in carvings on the first-floor beam carvings. On the second-floor beam, the story of Ramayana is chiselled on stone. Facing the temple is a statue of Krishna’s vahana, the man-bird Garuda sits on a column.
The steps to the first floor of the temple are narrow, small and is not uncommon for the first timers to hit their head while climbing down the stairs. From the first-floor balcony, one could look around the Durbar Square. The temple is adjacent to the Patan Museum, due to which one could glance at the temple from the window of the museum. If viewed with binoculars from the museum window, one would give a clear view of the idols of Lord Krishna and his consorts enshrined in the temple.
Also Read | Krimchi Temples: The abandoned prestige of Jammu & Kashmir
Legend - It is believed that the initiation of the temple happened because of a dream that King Siddhi Narsingh Malla had. In the dream, he saw Lord Krishna and his eternal consort Radha standing in front of his palace - which used to be the Patan Durbar back in the day. To give life to his dream and to pay his respects, he instructed the construction of the temple at the very spot he saw them standing in his dream. The temple was completed and inaugurated in the year 1637.
The temple was hard-hit by the 2015 earthquake, sustaining major structural damage, especially to its upper floors. It was meticulously restored by the Kathmandu Valley Preservation Trust (KVPT) at the cost of 5.7 million Nepali rupees or $ 55,000 USD, and reopened to pilgrims and tourists in 2018.
Krishna Mandir Kathmandu Nepal Lord Krishna