PM Modi said the freedom struggle involved ‘tapasya’ of lakhs of countrymen, but attempts were made to limit their history as well. But today, after decades of independence, the country is boldly correcting those mistakes.

New Delhi, Jan 24: Prime Minister Narendra Modi unveiled a hologram statue of Netaji Subhas Chandra Bose at India Gate and said the country is bolding correcting “mistakes” made after independence. Notably, This hologram would be in place till the work of the statue of Netaji is completed. The statue was unveiled in the same place to mark the year-long celebration of the 125th birth anniversary of Netaji Subhas Chandra Bose. 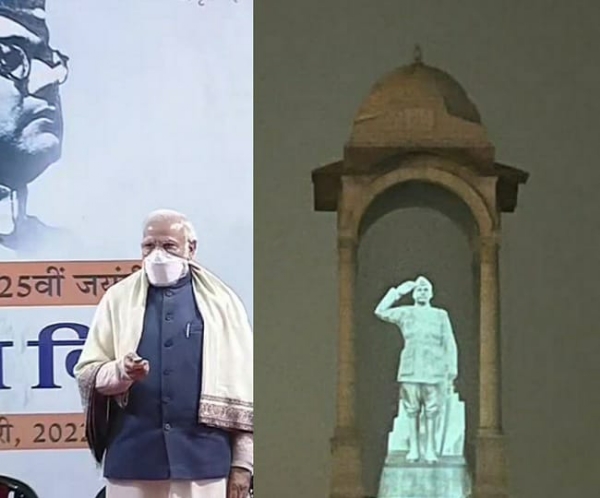 The Prime Minister said the freedom struggle involved ‘tapasya’ of lakhs of countrymen, but attempts were made to limit their history as well. But today, after decades of independence, the country is boldly correcting those mistakes. He cited Panch Teerth associated with Babasaheb Ambedakar, Statue of Unity to commemorate the contribution of Sardar Patel, Janjatiya Gaurav Diwas in the honour of Bhagawan Birsa Munda, Tribal Museums to remember the great contribution of the tribal community, naming an Island in Andamans after NetaJi to comommerate 75 years of tricolour in Anamans and Sankalp Smarak in Andamans to honour Netaji and INA, as some key steps in the direction of correcting the mistakes of the past.


Further, he recalled his emotional visit to Netaji's ancestral residence in Kolkata on the Parakram Diwas last year. The Prime Minister said he also cannot forget the day of 21 October 2018 when the Azad Hind government completed 75 years. “In a special ceremony held at the Red Fort, I had hoisted the tricolour wearing the cap of the Azad Hind Fauj. That moment was wonderful, unforgettable”, he said.

PM Modi said if Netaji Subhash was determined to do something, then no power could stop him. We have to move ahead taking inspiration from Netaji Subhash's 'Can Do, Will Do' spirit. The grand statue of Netaji Subhas Chandra Bose who has established an independent government in India, is being installed in digital form near India Gate and soon this hologram statue will be replaced by a big granite statue.

Also Read: When the Nehru govt spied on Netaji's family

On the occasion of his 125th birth anniversary, conferred the 'Subhas Chandra Bose Aapda Prabandhan Puraskars' to the 8th Bn National Disasters Response Force, Ghaziabad for its work in disaster realm for the year 2019. "Earlier disaster management was handled by the agricultural department. Our government strengthened NDRF. International agencies hailed our initiatives in the disaster management sector," the Prime Minister added.
Also Read: 10 images that narrates life journey of Netaji on Parakram Divas today!

He said that the Central government has laid emphasis on reform as well as an emphasis on relief, rescue and rehabilitation. "We modernized NDRF, expanded it across the country. Space technology and other best possible practices have also been adopted for planning and management," PM Modi said.
PM Narendra Modi Netaji Subhash Chandra Bose India Gate Hologram