Republic Day Celebrations in 2022 have number of new initiatives because of 75th year of India’s Independence.

The Constitution of India came into effect on 26 January, 1950 which is celebrated as Republic Day. The day is celebrated with full vigour and enthusiasm emphasizing magnificence of Indian Armed Forces and Military capabilities in Republic Day Parade. Though the Constitution came into force on 26 January, 1950, it was adopted by Indian Constituent Assembly on 26 November, 1949. 26th day of January was chosen as the day for implementation of the Constitution to coincide with the day of Purna Swaraj, the declaration of Indian Independence by Congress in 1930.
After partition in August 1947, independent India remained a Constitutional Monarchy under King George VI of England with Earl Louis Mountbatten as Governor-General of India. A Constituent Assembly of elected members was set up in 1946 for the drafting of the Constitution, which would later become the Foundation Stone of/for Indian Administration. After numerous debates and discussions, longest written constitution of the world with 444 articles in 22 Parts, 12 Schedules and 1,46,385 Words was put together. It now has 118 Amendments. On 26 January, 1950, 34th and last Governor-General of India,Chakravati Rajagopalachari read out the Proclamation announcing the birth of Republic of India. Thereafter, Dr. Rajendra Prasad took the oath as First President of India. He then, addressed the crowd, first in Hindi and then in English.
“Today, for the first time in our long and chequered history, we find whole of this vast land brought together under the jurisdiction of one Constitution of a Union which takes over responsibility for the welfare of more than 320 million men and women who inhabit it.”
Thereafter, he, in his State Coach, proceeded to attend First Republic Day Parade and was greeted by thousands of people thronging the route as well as the venue. Venue of First Republic Day Parade was Irwin Stadium, now known as Major Dhyan Chand Stadium. On the arrival at the venue, a mixed Contingent of 3000 Armed Forces Personnel welcomed him with a 31 Gun Salute. Afterwards, he took a round of the stadium in a jeep inspecting them. Armed Forces had put in a lot of effort and performed very well. More than 100 Aircrafts participated in an impressive Fly Past which culminated the event. This was followed by “Beating the Retreat”. 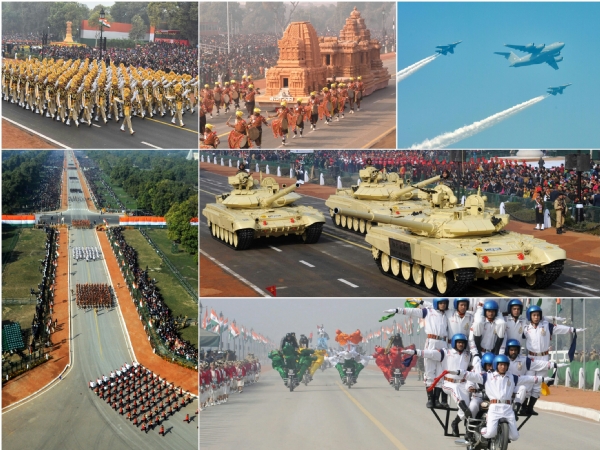