The pillars of the temple exhibit some of the best details and finishing of sculpture and art work in the entire complex.

If you are someone who appreciates fine sculptures, artwork and architecture, and are looking to explore more of it, then this temple is the place for you. It won’t be an exaggeration to call it the true jewel of Belur and here is why. The Chennakeshava temple, also known as Keshava temple, is a 12th century Hindu temple in Hassan, Karanataka. It was built in 1117 CE on banks of Yagachi River in Belur - an early Hoysala Empire capital. The temple was constructed by King Vishnuvardhana, over 3 generations. It is true that it took as many as 103 years to complete the entire temple! 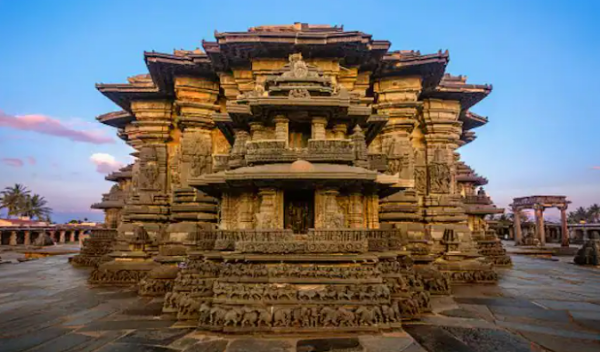 Throughout history, it was damaged & robbed during wars repeatedly, and it has been rebuilt numerous times. It is located 35 kms from Hassan. Chennakesava is a manifestation of Lord Vishnu. Hence, this temple is dedicated to Lord Vishnu and is a functioning Hindu temple since its establishment. It is described with great respect in medieval Hindu texts. It is still an important pilgrimage site in Vaishnavism today.
The artwork done in the temple shows scenes of life in the 12th century dancers and musicians. It depicts pictorially, narration of Hindu texts like Ramayana, Mahabharata, and Puranas. This is a Vaishnava temple with many Shaivism, Shaktism themes, and images of a Jina from Jainism, and Buddha. The temple is a reflection of the artistic, cultural, and theological perspectives in 12th century South India under rule of Hoysala Empire.
Temple History: The Chennakeshava Temple was a centrepiece of the Hoysala kingdom and it is believed to be closely related to the military achievements of the king who commissioned it in 1117 AD, King Vishnuvardhana. The king had fought wars with the Western Chalukyas and had also defeated the Cholas. The temple was built after the land’s best architects and artists were recruited and engaged in producing new designs and styles that would be the hallmark of the complex.
Layout: The Chennakeshava temple is considered one of the greatest architectural achievements during the Hoysala period. As one enters this vast complex of the temple, a large rajagopura arches above. The centre-piece the temple sits in the centre, facing the east, following the most followed orientation of temple architecture.
Also Read | Padmanabhaswamy temple: the true treasure of South India!
On the right of the temple is the Kappe Channigraya temple and a smaller temple dedicated to a Lakshmi reincarnation - the goddess Sowmyanayaki, sits behind the two. Attractions in the temple complex include two ornate pillars, one of the Garuda and one with a lamp. The former was built during the Vijaynagar period and the latter is attributed to the Hoysala period.
Architecture: Built using soapstone, the Chennakesava temple features an extremely detailed finish built around a typical Hoysala style blueprint. The scale of the temple is what distinguishes it from other temples of the Hoysala period. It is considered to be one of the earliest creations of this dynasty. The temple stands 37 metres tall. Its outer walls are detailed with finely done artwork.
Art of the temple: The pillars of the temple exhibit some of the best details and finishing of sculpture and art work in the entire complex. The Narasimha pillar is one of the most popular of these temple pillars. There are a total of 48 pillars - all uniquely carved and decorated. The four central pillars were hand chiselled by artisans and feature madanikas. The sanctum has a magnificent 3.7 m tall image of Sri Vijaya Narayana in black stone. The prabhavali of this murti has the 10 avatars of Sri Vishnu. 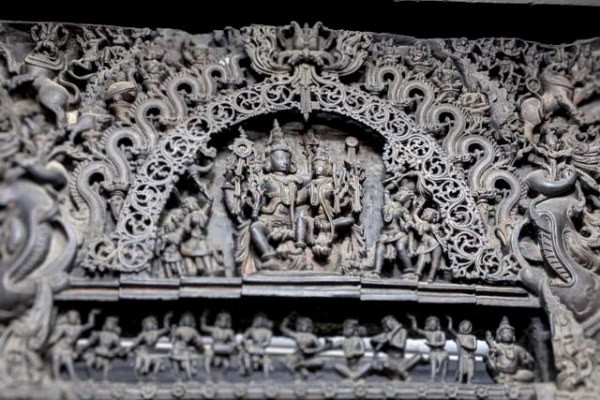 Visitors keen to study details of the wall sculptures at the temple will find many references and depictions of important events from Mahabharata and Ramayana. The doorways of the mantapa shows a Hoysala king slaying a tiger or a lion. It is also believed that this could be a symbolic representation of the defeat of the Cholas, whose royal emblem is a tiger.
There are many more important sculptures in the complex of the temple. Some of them are the Gajasurasamhara - sculpture of Lord Shiva, a sculpture of Ravana, Durga killing Mahishasura etc. There are multiple smaller shrines at the entrance of the temple. Another curious feature of these many sculptures is the signatures left by the artists of the period, giving us more insight into the lives and culture during the Hoysala period.
Chennakeshava temple Belur Lord Vishnu South India