The railways had warned its job aspirants that those found involved in vandalism and unlawful activities while protesting will be barred from ever getting hired in the railways.

New Delhi, January 26: Amidst the protests by aspirants, the Railway Ministry has decided to suspend Non-Technical Popular Categories (NTPC), and Level 1 tests. The Railways has also formed a committee to hear the grievances of those who passed the exams under different Railway Recruitment Boards (RRBs) and those who have failed. 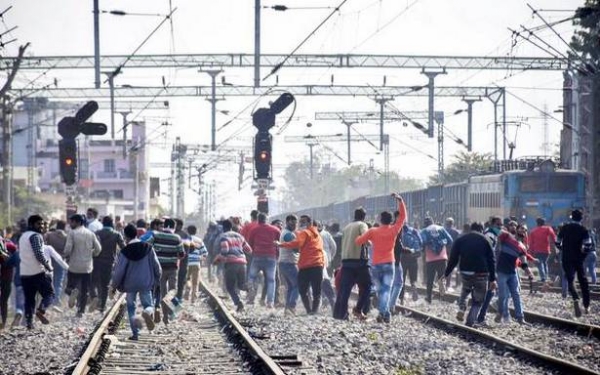 The Ministry of Railways said, "Railway Ministry stays examinations of Non-Technical Popular Categories & Level 1 of Railway Recruitment Board in wake of students' protest. A committee has been formed to listen to the candidates who cleared or failed. It will give a report to the Ministry."
The railways had warned its job aspirants that those found involved in vandalism and unlawful activities while protesting will be barred from ever getting hired in the railways. The Ministry said, "Railway job aspirants found indulging in unlawful activities may face lifetime debarment from obtaining Railway job." The development came a day after protesters in Bihar squatted on railway tracks.
Thousands of students have been protesting across the country, against the Railway RRB-NTPC exam 2021 result, which was announced on January 15.
Also Read | 'Keep Patole under observation, check his health': Maha BJP chief to Congress for his comment against PM Modi
Candidates are objecting to Railways' decision to conduct the exams in 2 stages, claiming that the second stage for final selection is like 'cheating' those who appeared and cleared the first stage of the RRB-NTPC for computer-based test (CBT). The results of the RRB NTPC for CBT-1 exam was released for shortlisting the candidates for the CBT-2.
Denying these allegations, Ministry of Railways has said that the second stage exam was clearly mentioned in the notification.
NTPC Level 1 exam Indian Railways Protests