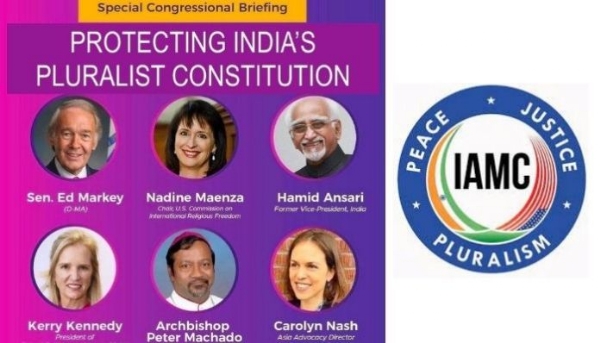 The virtual event is hosted by 17 US-based rights organizations including Amnesty International (USA), Genocide Watch, Hindus for Human Rights, Indian American Muslim Council amongst others.
The groups based in USA responsible for hosting this event are known for targeting India many times for its sovereign decisions. The groups have not just lobbied against India for acts passed in the parliament democratically, but also engage in the discourse which is anti-Indian and hinduphobic in nature.
The IAMC too, is responsible for hosting and promoting this event. It is the same radical Islamist group that has alleged links with banned terror organizations like the Students Islamic Movement of India (SIMI).

According to a recent expose by DisInfo Lab, the IAMC has allegedly paid money to lobby groups in the USA to get India black-listed by the USCIRF (United States Commission on International Religious Freedom). DisInfo Lab has also alleged that the group has also open links with terror outfit Jamaat-e-Islami (JeI).
With the help of Fidelis Government Relations (FGR) and First Principles Strategies, IAMC raised US $ 4,12,000 to promote sanction legislation on Burma, China and India on ‘issues related to human rights’.
Also Read | Hilarious! Swara Bhaskar sheds crocodile tears in front of Mamata Banerjee, asks her to save democratic principles
FGR head Terry Allen is a long time associate of Nadine Maenza the USCIRF Chair who is also participating in the event. IAMC has taken repeated stances against the ruling Indian government to fight ‘civil rights and liberty issues in India’ to reaffirm the ‘rights of religious minorities’. However, contrary to its claim, the organisation was found lobbying against India in 2013 as well – a year before the current dispersion of the BJP came to power in 2014.
IAMC members were vocal supporters of the Taliban, including Kaleem Kawaja who gave a call, ‘Brother, you can spare a tear for Taliban’. IAMC was caught spreading fake news in India to incite communal violence. The organisation was slammed with UAPA in 2021. With participation of Swara Bhasker and Hamid Ansari, local voices have increased the causes of IAMC to peddle the narrative of ‘minorities under threat’ in India.
Swara Bhaskar IAMC Taliban DisInfo Lab