BJP hits out at Congress over the PM's security breach, says it tried to physically harm PM Modi

In a major security lapse, a group of protestors were allowed to block the PM’s convoy for over 20 minutes, causing a dangerous lapse in the security of the nation’s PM.

New Delhi, January 06: Following Prime Minister Narendra Modi's security breach, the BJP launched an all-out attack on the Congress over the breach, alleging it wanted to physically harm him as repeated defeats in elections have taken the party on the path of "insanity". 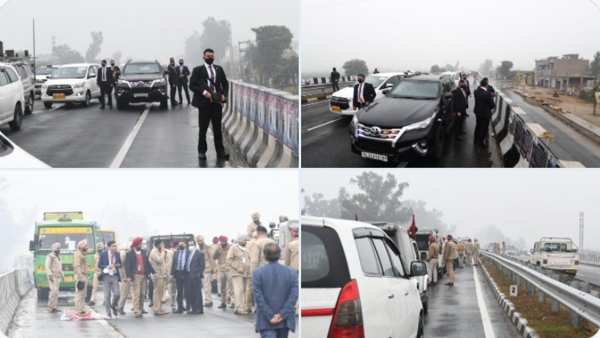 In a major security lapse, a group of protestors were allowed to block the PM’s convoy for over 20 minutes, causing a dangerous lapse in the security of the nation’s PM. According to a Home Ministry statement, after the serious lapse in security, Modi’s convoy decided to return without attending an event at a martyrs’ memorial at Hussainiwala. The prime minister also could not attend a rally in Ferozepur.
Top BJP leaders, including Home Minister Amit Shah and party president J P Nadda, lashed out at the Congress, which is in power in the state, over the incident.
Nadda accused the Congress of trying "all possible tricks to scuttle" Modi’s programs, including a rally, in the state. Union Minister Smriti Irani asked whether the Congress leaders were "happy that the prime minister was on the verge of death."
Hitting out at the state government after Modi’s rally was called off and another program disrupted as protesters blocked his route breaching the security protocol, Nadda said what is extremely worrisome is that the incident was also a big security lapse.
In a series of tweets, Nadda sought to put the state government in a dock over its alleged lapses. Nadda alleged that the state police were instructed to prevent people from attending Modi’s rally and a large number of buses were stranded because of the high-handedness of the police in connivance with the protesters.
In doing so, they did not bother that the prime minister was to pay tributes to Bhagat Singh and other freedom fighters, and lay the foundation stone for key development works, the BJP president said.
"By their cheap antics, Congress government in Punjab has shown that they are anti-development and have no respect for freedom fighters too," he said, alleging it was done as the ruling party in the state fears a resounding defeat in the upcoming Assembly polls.
While, Amit Shah said, what was witnessed in the state is "Congress-made" and a trailer of how this party thinks and functions. "Repeated rejections by the people have taken them on the path of insanity. The topmost echelons of the Congress owe an apology to the people of India for what they have done," he said.
Noting that his ministry has sought a detailed report on the security breach in Punjab, Shah said such dereliction of security procedure in the prime minister’s visit is unacceptable and that accountability will be fixed.
Addressing a press conference in Delhi, Union Minister Smriti Irani blasted the Congress, alleging planted political instruments were given political patronage by the party’s government in Punjab to breach Modi’s security. "Never before in the history of our country has a state government knowingly constructed a scenario where the prime minister of the country will be brought in harm’s way," she said.
"The Congress failed in its murderous intentions on the holy land of Punjab... Congress leaders were expressing joy over the prime minister’s security breach. Were they happy that Prime Minister Modi was on the verge of death?" Irani posed.
Hitting out at the Punjab government, she alleged police functionaries in a state were "directed to breach the security of the Prime Minister of India and cause him physical harm".
.
.
BJP PM Modisecurity breach congress Punjab Congress Idia