Upon arrival, Djokovic was detained by ABF and was reportedly questioned for hours

Melbourne, January 7: Jelena Djokovic, wife of tennis legend Novak Djokovic, on Friday, shared support to her husband on social media. The 34-YO, who is unvaccinated against Covid-19 was detained on arrival, at Melbourne’s Tullamarine Airport. He has currently been kept at a hotel in Melbourne. 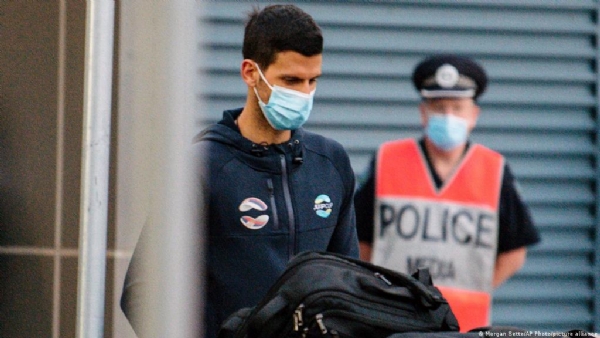 The Australian government also cancelled his visa, and has kept him at the Park Hotel in Melbourne’s inner north, where immigration officials also place refugees and asylum seekers. In developments on January 6, Djokovic’s visa was cancelled and Australian Border Force had announced that he will not be allowed into the country.
Djokovic’s mother Dijana too, lashed out against the federal government saying that the situation is nothing less than a political attack. She told a press conference on Thursday, “I feel terrible since yesterday, the last 24 hours. They are keeping him as a prisoner. It’s just not fair. It’s not human.”
Djokovic had travelled to Melbourne only after he was granted permission to play in the Australian Open by independent medical panels appointed by Victorian government. Djokovic reportedly had been infected with the virus in the last 6 months and that according to the Australian Technical Advisory Group on Immunisation guidelines was a valid reason for a temporary exemption from receiving the vaccine.
Upon arrival, Djokovic was detained by ABF and was reportedly questioned for hours. He has also been denied the request to spend his quarantine period in a rented apartment where his team is at. All his belongings are also at the airport, including his wallet and important documents.
Also Read | 9 international travellers including one from South Africa test positive for Covid-19 at Mumbai
It is noteworthy that Australian PM Scott Morrison, announced yesterday that rules are the same for everyone, and Djokovic, who is unvaccinated, won’t be allowed entry into Australia. Indian teenager Aman Dahiya, a 17-YO who is yet to receive the vaccine, too, been denied entry. Russian tennis player Natalia Vikhlyantseva was also earlier denied entry as Russian Sputnik V vaccine, (in use in over 70 countries in the world), is not recognised by Australian government.
Novak Djokovic Australia Australian open tennis player Melbourne tennis