Aftab tried to kill me, threatened to cut me into pieces: Shraddha's police complaint in 2020 goes viral

In the complaint registered by Shraddha, she said that Aftab wanted to kill her and cut her into pieces.

In yet another development in Shraddha Walkar who was murdered and chopped into pieces by her live-in partner Aftab Poonawala, an image of her complaint that was lodged against him at the Tulinj police station on November 23, 2020 is going viral. 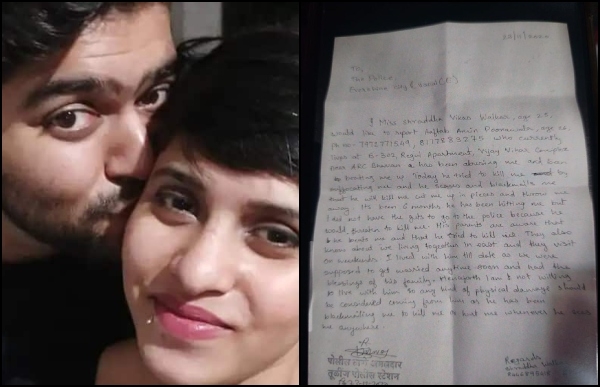 In the complaint registered by Shraddha with the signature of Tulinj police on it, she said that Aftab wanted to strangle her and threatened to cut her into pieces he actually did two years later. In yet another shocking development in the complaint, Shraddha also mentioned that Aftab's family knew that he use to beat her and wanted to kill her.

Aftab's family use to visit the couple on weekends, the letter informed. Shraddha also said that she was still with him because they were about to get married. She also wrote that Aftab's family's blessings are with him and Aftab will be responsible if she gets hurt.
“He scares and blackmails me that he will kill me, cut me up in pieces and throw me away. His parents are aware that he beats me and that he tried to kill me. They also know about us living together and they visit us on weekends. I lived with him till date as we were supposed to get married anytime soon and had the blessings of his family,” read the complaint letter, hand-written by Walker.
Reports suggest that Shraddha also had said that Aftab had been hitting her for the past six months but she could not report the incident as the latter would threaten to kill her. The Delhi police have attained a copy of the complaint letter and are verifying it. The Delhi Police is also investigating if action was taken by the Vasai cops after Shraddha filed a complaint with them.
Also Read: #LoveJihad: Shraddha's father demands "worse than hanging" for Aftab
Aftab on Tuesday left the Forensic Science Laboratory (FSL), Rohini as the Delhi Police began court-sanctioned polygraph tests to take the probe forward. "Pre-med sessions and scientific sessions for Aftab's polygraph test leading up to the polygraph test are underway," said FSL officials on Tuesday.
Delhi Police claimed to solve the six-month-old murder case after arresting Aftab based on a complaint filed by Shraddha's father. Aftab and Shraddha met on a dating site and moved in together to a rented accommodation in Chhatarpur as the relationship grew. On receipt of the complaint from Shraddha's father, Delhi Police registered an FIR on November 10.
Subsequent interrogation of the accused revealed that Aftab killed Shraddha on May 18 after which he started researching ways to dispose of the body. He also borrowed ideas on disposal from popular crime shows on his streaming devices, Delhi Police revealed. He also told police that he read up on human anatomy before chopping his girlfriend's body.
Police said after browsing on the internet for ways to remove all traces of his crime, Aftab mopped blood stains from the floor of the couple's Chhatarpur apartment with some chemicals and also disposed of all stained clothes. He then shifted the body to the bathroom and bought a refrigerator where he hoarded the chopped body parts, police further informed.
Aftab Shraddha Shraddha Walkar Mumbai Maharashtra