Issuing an apology, Richa said that her intention was not to offend or hurt anyone. She even talked about her family connection with the Army.

Mumbai, Nov 24: After mocking the Indian Army with her "Galwan tweet" and receiving backlash on social media, Bollywood actor Richa Chadha issued a statement apologising for her "unintentional" words.
This came she has been facing flak with users calling for the actor’s boycott from social media. She was trolled for insulting and belittling the Indian Army and the sacrifice of the jawans in the 2020 Galwan clash between India and China. 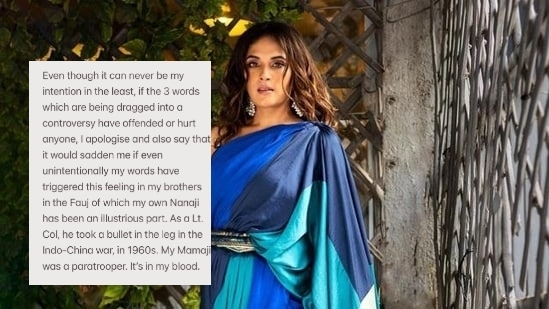 Issuing an apology, Richa said that her intention was not to offend or hurt anyone. She even talked about her family connection with the Army. "Even though it can never be my intention in the least, if the 3 words which are being dragged into a controversy have offended or hurt anyone, I apologise and also say that it would sadden me if even unintentionally my words have triggered this feeling in my brothers in the fauj (army) of which my own Nanaji has been an illustrious part," Richa said in her apology tweet.
She said that her "Nanaji (maternal grandfather) as a Lt. Col took a bullet in the leg in the Indo-China war in 1960s. My Mamaji was a paratropper. It’s in my blood."
She further said, "A whole family is affected when their son is martyred or even injured while saving the nation which is made of people like us and I personally know how it feels. It is an emotive issue for me." Before her apology statement, she said that she had “no idea”, presumably about the row and banter that her tweet had caused. “Just received a ‘call’, had muted replies so had no idea… bye all,” she said.
Also Read: Richa Chadha mocks Indian Army with a 'Galwan tweet' after it said 'We can take back PoK from Pak'
Earlier, Richa Chadha took to Twitter to mock Indian Army over the statement of Northern Army Commander Lt General Upendra Dwivedi that the Indian Army is ready to take Pakistan-occupied Kashmir back. Sharing a post on the statement, the actress wrote, "Galwan says hi".
Richa Chadha Indian Army Galwan Valley Galwan Galwan tweet China