Bollywood actress Richa Chadha took to Twitter to mock the Indian Army over the statement of Northern Army Commander Lt General Upendra Dwivedi that the Indian Army is ready to take Pakistan-occupied Kashmir back. Sharing a post on the statement, the actress wrote, "Galwan says hi". 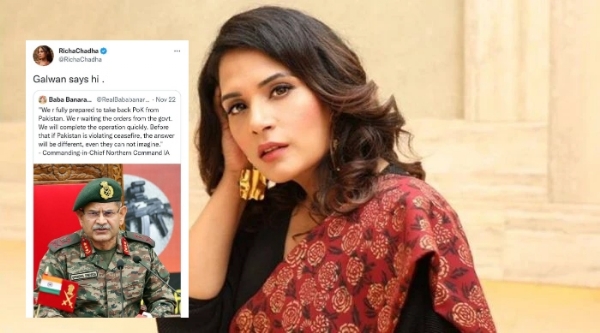 Notably, in June 2020, Indian soldiers engaged in a violent clash with Chinese soldiers in the Galwan valley. 20 Indian soldiers were martyred in the clash. Reports suggested that Chinese soldiers used iron rods, nailed clubs and several harmful objects to attach the Indian Army at that time.
So this tweet by this Bollywood actress seemed like the actress was mocking the Indian Army and humiliating the sacrifice of the jawans. Besides, as soon as the actor made that tweet, all hell broke loose on Twitter and netizens started slamming her for insulting the army by talking about the Galwan incident.
BJP’s Majinder Singh Sirsa added to the entire outrage and wrote that Richa should be ashamed of her tweet. His tweet read, "Disgraceful tweet. Should be withdrawn at the earliest. Insulting our armed forces is not justified (sic)."
Now, she deleted her comment and also blocked her Twitter account. But, the netizens were quick enough to show how it was an act of mockery towards the Indian Army. Here are some of the reactions-
Lt General Upendra Dwivedi’s statement was made with reference to Defence Minister Rajnath Shinde’s previous address in which he said the Indian army’s goal is to reclaim Pakistan-occupied Kashmir now. He said, "We have just begun our journey of development in Jammu and Kashmir and Ladakh. We will achieve our goal when we reach Gilgit and Baltistan (sic)."
Adding his bit to the statement by the minister, Dwivedi said on Tuesday, “As far as the Indian Army is concerned, it will carry out any order given by the Government of India. Whenever such orders are given, we will always be ready for it (sic).” He also said, “The military is always ready to make sure that ceasefire understanding is never broken as it is in the interest of both nations, but if broken at any time, we will give them a befitting reply (sic).”
Richa ChadhaIndian Army Galwan Valley Galwan Valley clash PoK Pakistan Majinder Singh Sirsa BJP