United Nations Secretary-General Antonio Guterres highlighted India's contribution to climate action in an article. He said that everyone needs to make peace with nature, reduce our carbon footprints, and have a lifestyle that is compatible with a sustainable society and economy. 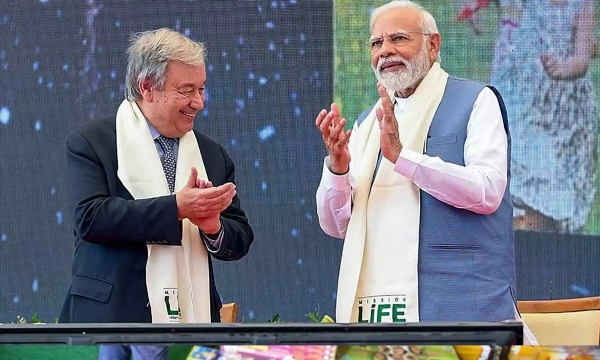 The UN Chief, who came to India in October to launch a major national and global initiative 'Mission LiFE' (Lifestyle for Environment), writes in his article that this initiative of Prime Minister Narendra Modi will mobilize citizens from all over world to understand that they have a role to play.

Talking about climate change, Guterres wrote, "We, presently, are consuming much more than the planet can produce. We are using 1.6 planets every year which is not sustainable. We need to think about how we behave, what we eat, and how can we recycle things and avoid waste. We need to understand that without the individual behaviour of each person is compatible with a sustainable society, there is not much that the Governments can do to reduce pollution."
"Let us not forget that today pollution is killing seven million people per year. So, we need to understand that pollution is a killer, it is not just ugly", he further added.
In the article, UN Chief also said that with the biodiversity loss, the countries are losing a fantastic capital for the future; some of the medicines will probably never be available for the basic needs of the population.
During his official visit to India, the UN chief also visited India's first 24x7 solar-powered village Modhera in Gujarat. Highlighting the benefits of project, Guterres said, "The gigantic project of India (commitment to achieve 500 GW renewable energy generation by 2030) is a very important contribution to climate action."
"There was a very symbolic nature to my visit to the village close to the temple of Sun (Surya Mandir in Modhera). It is not only the investment made by the Government; it is the way the community came together which is commendable. You have villages where every house has some solar panels in which there is a link between the use of clean energy and the well-being of the families and of the community, the way the school works much better, the way people have more money to spend on other things or to create their savings," he added.
UN Chief further wrote that the solar project is a remarkable one of inclusivity and solidarity and very much in line with what the UN has presented in its Agenda 2030, the Sustainable Development Goals (SDGs), which aims to eradicate poverty, and improve living conditions for everybody, everywhere.
And so, this is an exceptionally relevant contribution to climate action to defeat climate change. There is a sense of community, solidarity, and inclusivity that is a lesson for the world.
UN United Nations United nations chief United Nations Secretary-General Antonio Guterres India Climate Climate Action