Most people have no knowledge about its origin and also that the heritage piece of jewellery has unfortunately changed hands, finally landing with Cartier

New Delhi, May 11: This year's Met Gala was full to the brim with extravaganza and controversies, also featuring several pieces of the Indian origin. Some of these were Natasha Poonawalla in the glamorous Sabyasachi saree, Camilla Cabello, Ashley Park wearing pretty Prabal Gurung dresses, and the most controversial of the lot - Emma Chamberlin wearing a stolen choker of an ancient Indian Maharaja! 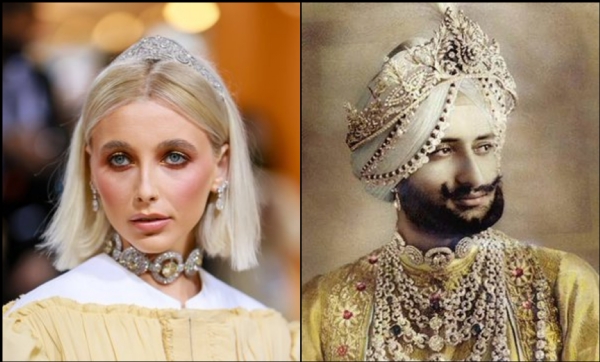 Popular American Youtube star Emma Chamberlain made an ethralling debut at the Met Gala 2022 dressed in Louis Vitton. But Chamberlin's choice of jewellery has garnered more attention on the internet than her outfit.


Emma was seen wearing a diamond neckpiece that had once belonged to Maharaja Bhupinder Singh of Patiala, a part of Punjab. But interestingly, Emma, in all her social media pages has attributed the piece of antique jewellery along with her diamond tiara and earrings, to Cartier.
According to reports, Maharaja Of Patiala owned De Beers diamonds and had commissioned Cartier to make a ceremonial necklace with the De Beers diamond as its centrepiece. The necklace was made in 1928 and was known as the Patiala Necklace.

It has 5 rows of platinum chains embellished with 2930 diamonds and some Burmese rubies. The slightly yellow De Beers diamond is placed at the centre. This was the most expensive piece of jewellery ever made in history and it would have cost some USD 30 million dollars today in its original form. The Maharaja reportedly bought the largest diamond in 1889 after it was mined from South Africa in 1888. He had spotted it while it was on display at the Paris Universal exhibition.

Also Read | Met Gala 2022: Natasha Poonawalla celebrates rich, Indian craftsmanship in Sabyasachi saree
In 1948, the necklace went missing from the Patiala royal treasury. For 32 years, there was no trace of this necklace. Tt reappeared mysteriously during a Sotheby's auction in 1982 but not in its entirety. Instead only the De Beers diamond was up for auction. Cartier bought the diamond at the auction. Then, a part of a necklace was found in an antique shop in London. Cartier later bought the necklace and replaced the missing stones with replicas.
Several netizens have called Emma out for wearing a piece that was reported stolen :
Many also feel that the dark history attached to it - of misplacement and later being found years later by an auction house - makes the choker unique & needs to be treasured. It also depicts the colonial past of India, where many such precious heritage jewellery of many royal families were transferred to British and never returned to the original owner.

The display of such a precious family heirloom at the Met Gala is truly distasteful. Most people have no knowledge about its origin and also that the heritage piece of jewellery has unfortunately changed hands, landing with Cartier.
Met Gala Met Gala 2022 Emma Chamberlain