The crackdown comes amidst reports of social media platforms particularly WhatsApp being used for mobilising protests in Bihar which witnessed incidents of train bogies being torched.

New Delhi, June 20: The Centre has banned 35 WhatsApp groups for spreading fake news on Agnipath scheme and Agniveers, said ministry of home affairs. At least 10 have been arrested on charges of rumour-mongering and organising protests. 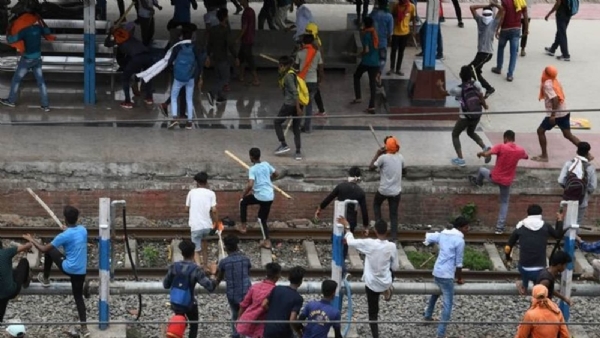 The crackdown comes amidst reports of social media platforms particularly WhatsApp being used for mobilising protests in states like Bihar which witnessed incidents of train bogies being torched.
On June 17, Bihar govt while suspending internet services in 12 districts till Sunday, said that internet was being used to transmit objectionable content in order to spread rumours with an intent to incite public & cause damage to life and property.
Telangana Police arrested the owner of a coaching institute in Narasaraopet town of Palnadu district in Andhra Pradesh for allegedly instigating youth to participate in the protests against the Agnipath scheme. The detained coaching institute owner Avula Subba Rao is accused of having created a WhatsApp group - Hakimpet Army Soldiers, which comprised hundreds of army aspirants. On this group, he had allegedly sent messages to all the members asking them to take part in the protests.
Also Read | Security forces geared up for Bharat bandh over Agnipath scheme
Amid the protests, the Centre has made it clear that there will be no rollback of the Agnipath scheme for recruitments to the armed forces for a 4-year tenure.
On the issue of vandalism, the defence ministry said that those accused in violent protests will not be recruited. The aspirants will have to submit a written pledge stating they didn't take part in the protests. The pledge will be verified by the police.
Agnipath Agnipath protests Bihar WhatsApp