The SC verdict on mobocracy and the trick of the media 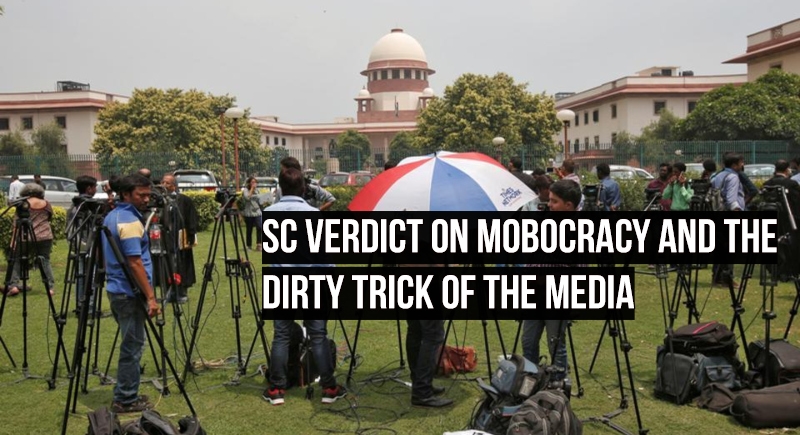 However the court has rejected the arguments to compensate the lynching victims on the basis of caste and religion.

Taking a tough stand against incidents of mob violence and lynching happened in different parts of the country in the recent past and asked the government to take measures to stop such incidents. “No citizen can take law into their own hands”, Chief Justice Dipak Misra said while pronouncing the verdict in this matter. The CJI said that it is the duty of the state to ensure that the machinery of law and order functions efficiently in maintaining peace.

The SC bench has reserved its judgement on the PILs against incidents of cow vigilantism saying that it would pronounce a detailed verdict on the issue in the due course. However, the CJI put the onus of preventing such incidents on the states considering it as a law and order issue.

It is true that there happened a number of incidents of mob violence involving the cow smugglers and those who wanted to protect the cows. It was also reported that the victims belonged to particular caste or religion. The concerned state governments are investigating in these incidents.

But it is also true that the recent lynching incidents resulted out of ‘fake news’ spread by the same news channels or social media channels or by newspapers. The information about child-lifters and child kidnapping went so viral that the alert and overzealous villagers took the law into their own hands and punished some innocent individuals with death penalty by lynching. It happened recently in Bidar, Dhulia and some other places.

The media is considered as the fourth pillar of democracy, a watchdog and the mirror of the society. Therefore, it is necessary for the media to take an impartial stand and report the happenings honestly and without emotions. But here in our country the media is indulging in exactly opposite of this. The negativity had so dominated the media in our country that they would not leave any opportunity to disseminate coloured and biased messages without going into details of the effects of such messages on the society.

When such unfortunate incidents happened, the media tried to blow them out of the proportion vitiating the social harmony and communal goodwill by targeting a particular community or group. And now, it has not spared the Supreme Court decision even. When the apex court did mention mob lynching and directed the government to pass anti-lynching law, the media projected it as a verdict pronounced against the cow vigilantes and their violence.

This is the trick media has played with the SC verdict and also with the people.
SC verdict on mobocracy Mob lynching media Supreme Court