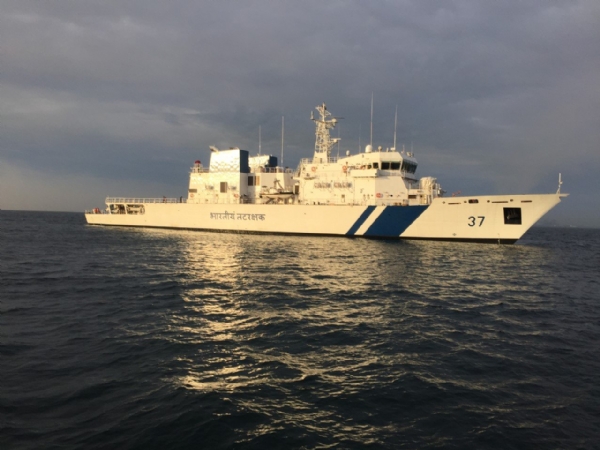 To ensure its success in tropical sea conditions, the OPV was built in a private shipyard in Chennai. Two inflatable boats for boarding, Search and Rescue, Law Enforcement, and Maritime Patrol will also be carried on the ship.
There's no doubt that the ship is fast, but it can also travel for 5,000 nautical miles at an economical pace. Because of this, it is able to serve as a command platform with the latest and most sophisticated technology and systems.
Also Read:  Game changer in air defence system: IAF inducts MRSAM that can hit multiple targets 70km away
Oil spill response equipment can also be transported on the ship. With a top speed of 23 knots, the ship has a range of 5,000 nautical miles at a cost-effective pace. This endurance and reach, along with the most recent and cutting-edge equipment and system, enables her to serve as a command platform.
Commission ceremony of ICGS Vigraha at Chennai on Aug28
INS Vigraha, commanded by Commandant PN Anoop, joins the Coast Guard's Eastern Region fleet, adding weight to the capacity on the Eastern seaboard.
Also Read: IAF's C-130J Super Hercules successfully lands at Emergency Field Landing in Rajasthan's Jalore
The ship will be stationed in the Eastern Region's Area of Responsibility, and upon her arrival in Visakhapatnam, a welcoming ceremony was held, which was attended by Deputy Inspector General Yoginder Dhaka, District Commander, Andhra Pradesh. The ICGS Vigraha comprises 12 officers and 90 enlisted members.