New Delhi, Jan 19: Amid the row over tableaux for the Republic Day parade, Defence minister Rajnath Singh wrote to the chief ministers of West Bengal and Tamil Nadu, assuring them the selection of tableaux was based on a transparent process. 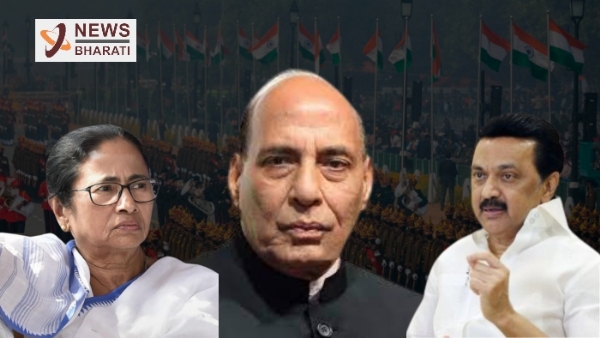 The minister wrote the letters after Mamata Banerjee and MK Stalin expressed disappointment over the Union government rejecting the tableaux of their respective states for the Republic Day celebrations, and sought Prime Minister Narendra Modi’s immediate intervention in the matter.
"I would like to assure you that the selection process of the tableaux participating in the Republic Day Parade is very transparent. I respect your sentiments and therefore would like to personally inform you that this time 12 out of 29 State/UT proposals have been approved," he said in his letter to West Bengal CM Mamata Banerjee.
"I would like to inform one more fact that this time in the tableau of CPWD also, a tribute has been paid to Bose on the occasion of his 125th birth anniversary. This is a testimony to the fact that the country is giving prominence to the birth anniversary of the great leader Bose," he added.
Also Read: Centre rejects Kerala’s Republic Day tableau for third time in recent years

To Tamil Nadu CM MK Stalin, he wrote,"Ministry of Defence invites proposals for tableaux from all States/UTs and Central Ministries/Departments. The tableaux proposals received from various States/UTs and Central Ministries/Departments are evaluated in a series of meetings of the Expert Committee comprising eminent persons in the field of art, culture, painting, sculpture, music, architecture, choreography etc. The Expert Committee examines the proposals on the basis of theme, concept, design and its visual impact before making its recommendations."
"As per the time slot allotted for tableaux in the overall duration of the parade, shortlisting of tableaux is done by the Expert Committee. For RDP-2022, a total of 29 proposals were received from States/ UTs including the proposal from State of Tamil Nadu. The Tableaux from the State Government of Tamil Nadu was considered in the first three rounds of meetings. After the third round of meeting, the tableaux could not make it into the final list of 12 Tableaux selected for participation in the RDP-2022," he added.
Also Read: Alert issued after intel input warns of terror plot, threat to PM Modi on Republic Day