Mumbai, January 27: After the inauguration of a refurbished sports complex in Malad, a large number of BJP and Bajrang Dal workers held protests against “renaming” the place after 18th century Mysore king Tipu Sultan. 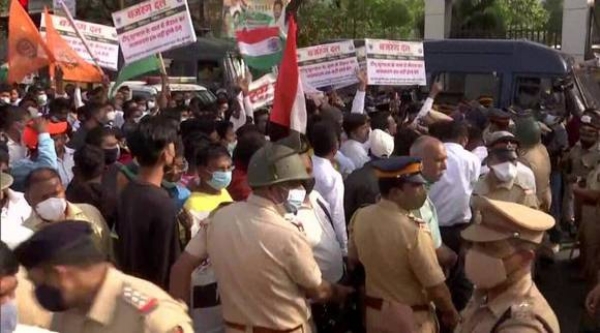 However, Shiv Sena leader and Maharashtra Cabinet Minister Aditya Thackeray said that the Brihanmumbai Municipal Corporation (BMC) has not cleared any proposal to rename the park after Tipu Sultan. "Finalising the official names of projects comes under the purview of BMC and the mayor has said that the official name of the park has not been finalised yet. BMC has not got any such proposal on the name yet," he said.
The BJP registered its protest, claiming that the event would be held to “rename the ground” after Tipu Sultan.
"We will not allow the ground to be named after a man who is responsible for the deaths of a large number of Hindus," Devendra Fadnavis said.
Also Read | Naming of sports complex after Tipu Sultan on Republic Day sparks controversy, BJP to stage dharna
He added, "The MVA government has insulted the sentiments of people. The BJP will not tolerate such an act. What is appalling is the manner in which the state government provided police protection to the event. But cops lathicharged BJP and Bajrang Dal workers who were protesting. This is highly condemnable."
Mumbai Protests Tipu Sultan Sports Complex Malad BJP Bajrang Dal