NCPCR said that it received a complaint alleging that Aaditya Thackeray used minors in Yuva Sena, the youth wing of Shiv Sena, and its Aarey protests and political campaigns

Mumbai, July 11: The apex child rights body National Commission for Protection of Child Rights (NCPCR) has directed the Mumbai Police to lodge an FIR against Yuva Sena president Aditya Thackeray for using minors as labour during Save Aarey protest campaign. 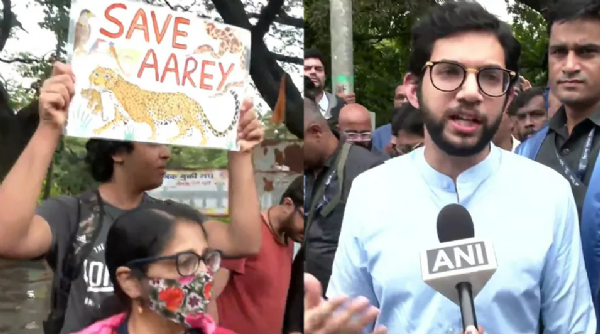 NCPCR said that it received a complaint alleging that Shiv Sena leader Aaditya Thackeray, President of Mumbai District Football Association, used minors in Yuva Sena, the youth wing of Shiv Sena, and its Aarey protests and political campaigns, said reports.
It also shared a Twitter link showing children holding placards as part of the protest. ln view of above instance, the Commission has thereby requested to investigate the matter urgently by lodging an FIR against the accused person at once, NCPCR said.
"An Action Taken Report along with copy of FIR and statement of children may be shared with the Commission within 03 days of receipt of this letter. This issues with the approval of Chairperson, NCPCR," it added.
Also Read | Fight for life: Aaditya Thackeray leads protest against Metro Car Shed in Aarey Forest
Thackeray led a protest against the state government's move to shift the proposed Metro-3 car shed to Mumbai's Aarey Forest. After taking over as Maharashtra CM last week, Eknath Shinde announced that the car shed for Mumbai Metro Line 3 would be moved back from Kanjurmarg to Aarey Forest.

At the protest, Thackeray said, "This is a fight for Mumbai, fight for life. We fought for forest and to protect our tribals. When we were, here no trees were uprooted."
NCPCR Aaditya Thackeray Save Aarey protest Aarey