The online outrage against the film Darlings , comes in wake of some scenes in the film where Bhatt’s character can be seen torturing her on-screen husband Vijay Varma.

Mumbai, August 4: After Aamir Khan’s ‘Laal Singh Chaddha,’ the netizens are now boycotting actor Alia Bhatt for promoting domestic violence against men in her upcoming movie ‘Darlings.’ The movie is set to release on August 5 on Netflix. 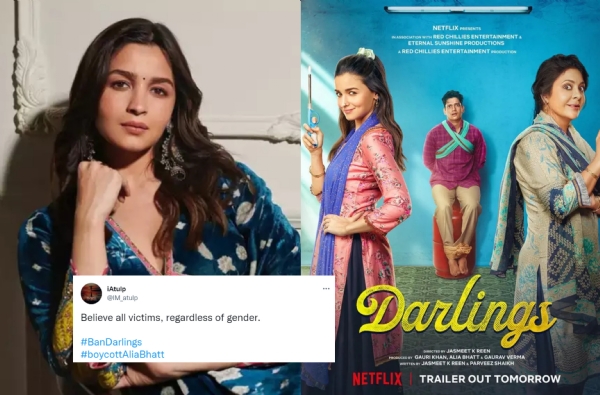 Bhatt is not just the protagonist in the movie, but the movie also marks her debut as a producer. The actress has co-produced the film with Shah Rukh Khan and Gauri Khan’s Red Chillies Entertainment. This movie also stars Vijay Verma, Shefali Shah & Roshan Matthew.
The online outrage against the film, comes in wake of some scenes in the film where Bhatt’s character can be seen torturing her on-screen husband Vijay Varma. Vijay plays her husband on screen, Hamza, and the trailer showed us how he's kidnapped, and taken violent revenge against.
In an attempt to seek revenge, Alia's character goes to the extent of hitting him, pushing his face inside a tank of water, etc. As a result, the people on the internet feel that the movie is promoting domestic violence & glorifying it. While the movie centers mostly on how Alia's character is treating Hamza the way she has been treated, netizens feel differently.
A Twitter said, “Everyone should #BoycottAliaBhatt for making a misandrist movie like Darlings. For bollywood, domestic violence on men is a matter of joke. Pathetic."
Another user said how patriarchy is coming back like a “cancer and metastasizing in court judgements." The person said, “Meanwhile Alia Bhatt produces and acts in #Darlings endorsing Assault on Domestic Violence on Husbands while the nation stays mum. This whole Victimhood is a charade."
This development comes a day after the team of Alia Bhatt’s ‘Darlings’ launched the song La Ilaaj from the film. During the event, composer Vishal Bhardwaj said that the film’s co-producer, Shah Rukh Khan, loved the track so much that he sang it to the composer over a phone call.
Also Read | Akshay Kumar starrer Raksha Bandhan writer Kanika Dhillon's Hinduphobic tweets go viral
He said, “Shah Rukh called me one night around 12-12.30 am. He started singing the song on the phone. He sang the entire song. Then he started narrating the meaning of it… He said ‘It would have been more fun had the song been for me’."
#BoycottAliaBhatt Alia Bhatt Darlings Vijay Verma Shefali Shah