New Delhi, Jan 21: The National Commission for the Protection of Child Rights (NCPCR) commission served a notice to all the state chief secretaries to identify madrassas that are being attended by non-muslim students as well. The commission said it had received complaints from different sources about non-Muslim students attending government-funded or recognised madrasas. 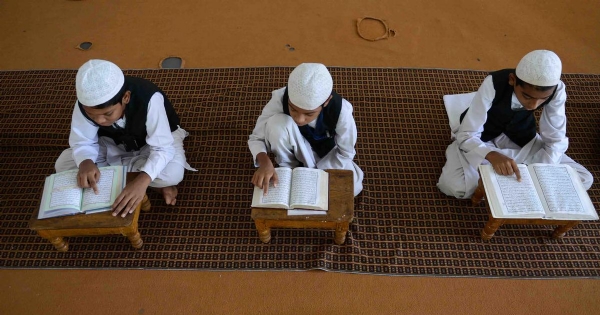 "We have received complaints from various places about non-Muslim students attending madrassas funded or recognized by the government. We have issued notices to all state chief secretaries to identify such madrassas and shift non-Muslim students from these madrassas to the schools," NCPCR chief Priyank Kanoongo was quoted as saying to ANI.
"The Uttar Pradesh Madrassa Board had made an objectionable and silly statement that it will continue to admit non-Muslim students in madrassas. Hence, we have written to Special Secretary Minorities that giving Islamic education to non-Muslim students is a violation of Article 28(3) and asked them to reply within three days,' he added.
Therefore, NCPCR recommended the UP government to conduct a detailed inquiry into all government-funded or recognized madrassas where non-Muslim children were receiving education. The commission also demanded physical verification of non-Muslim children attending madrassas and shift them to schools for formal education.
On Wednesday, after a meeting of UPMEB chairman Iftikhar Ahmed Javed announced that the Board had unanimously rejected NCPCR recommendations as there could be no differentiation on the basis of the religious faith of the students.
The letter undersigned by Chairperson-NCPCR Priyank Kanoongo had said based on various complaints received, "...it is noted that children belonging to Non-Muslim community are attending Government funded/ Recognised Madrasas."

The Commission's letter said: "However, it is also learnt that those Madrasas which are funded by the Government or recognised by the Government are imparting both religious and to some extent formal education to children. Further, it is also learnt by the Commission that some State/UT Government/s are providing them with scholarships too. This is a clear-cut violation and contravention of Article 28(3) of the Constitution of India which prohibits educational institutions from obligating children to take part in any religious instruction, without the consent of the parent."

"It is pertinent to mention that the Constitution of India makes it an obligation of the State to provide free and compulsory education to all children without any discrimination or prejudice and ensure that children go to neighborhood schools for availing formal education as per Section 6 of the RTE Act, 2009."

The statutory body constituted under a Commission for Protection of Child Rights (CPCR) Act, 2005, aimed at protecting child rights, said: "Conduct a detailed inquiry of all Government Funded/Recognized Madrasas who are admitting Non- Muslim children in your State/UT. The inquiry should include physical verification of children attending such Madrasas. Subsequent to the inquiry, admit all such children in schools for availing formal education.

It also ordered the undertaking of "Mapping of all Unmapped Madrasas in your State/UT and admit any/all children into Schools for availing formal education with immediate effect." The Action Taken Report by the states and UTs were to be shared with the Commission within 30 days from December 8, 2022.

The NCPCR letter referred to the Constitution (Eighty-sixth Amendment) Act, 2002 wherein Article 21- A, mentions providing free and compulsory education of all children in the age group of six to fourteen years as a Fundamental Right in such a manner as the State may, by law, determine.

"Consequent to the 86th Amendment in Constitution of India, for implementation of the "Right of Children to Free and Compulsory Education for children in the age group of 6 to 14 years, the RTE, Act was passed by the Parliament of India in August 2009. The National Commission for Protection of Child Rights (NCPCR) has been mandated to monitor the provisions and entitlements contained in the RTE Act, 2009," it added.
NCPCR Islamic education non-Muslim students Priyank Kanoongo madrassas Iftikhar Ahmed Javed